Adam Scott reckons he's in a much happier place with golf - and life - after admitting he hit rock-bottom four months ago at the British Open.

It is not often Adam Scott gets dejected but one of Australia's most optimistic sporting luminaries couldn't help reflecting on the day his golf game hit "rock-bottom" just four months ago.

Trudging away from Royal St George's after a dispiriting week at the British Open, Scott cut a sorry figure that Sunday in July declaring wearily: "I'm incredibly disappointed ... tired of playing mediocre golf."

He'd just turned 41, results had gone AWOL, he had a nine-month-old baby at home he wished he could spend more time with and he was musing about being fogged by the pandemic and wondering if he'd have to uproot from Switzerland to the US.

Scott wasn't, he admits, in a good place.

Yet it's a very different Scott now approaching his final PGA event of a roller coaster year at Sea Island in Georgia, as he looks forward to a potentially roaring finale to 2021, a happy Christmas and a fresh approach in 2022.

Asked by AAP on Wednesday if he was a happier soul now, Scott said, "I think so.

"I feel like I'm much more calm and feeling more optimistic about things than five months ago.

"That (day at Royal St George's) was kind of rock-bottom of frustration for me, frustrated with everything.

"Up to then, it had been a challenging season for me and that affects my general attitude because I put so much into my career and sacrificed a lot of things, including time at home, to do this.

"I just wasn't getting the results.

"The whole major season had passed me there on that day when you saw me and I was coming away empty-handed.

Since then, though, he's had a near-miss in a playoff for the Wyndham Championship in August and a fifth-place finish at the CJ Cup a month ago.

"The frustration's there in the down times but then I come to the realisation that golf's the only thing I know how to do, and so I don't have a lot of options outside of that," he said.

"So I better get my head back on and figure it out!"

An adjustment to the head of Scott's driver while he was in the UK has helped.

"I'd really struggled but things then started to feel a little more natural to me; the driver for me is a sensitive area," Scott said.

"It's amazing how that calms you down - you stand there at the tee in a more confident state.

"I feel like golf isn't as hard as it was earlier in the year."

Scott was also able to ditch any ideas of relocating too.

"We're far from out of this pandemic but it seems like we can see our way forward," he said.

"If the situation was getting worse, (moving bases) was certainly on the table but I haven't and things are now starting to take shape where we can make some plans how I can best manage my schedule."

To that end, Scott said he'll revert to playing more European Tour events like he did when he was younger.

""My intention is to play in Abu Dhabi and Dubai at the start of next year. That makes sense as I'm living in Europe," he said.

"Given where things are at in my life, I think that's going to be a nice way to start the year, and maximise not only my family time but my golf time as well."

He sounds like a man who knows where his priorities lie now.

""Our season is very long and as you get older, you have to make that time off somehow," Scott said.

"I have three small kids, so things at home are very busy.

"It's an exciting time, Christmas; the kids are obviously very excited and they better be good so Santa does show up!

"That's what I get to bribe them with for the next few weeks ..."

As for what Scott hopes Santa gets him, evidently a 15th PGA Tour title this week would do for as an early one.

"I'm very optimistic about where things are at," the 2013 Masters champion said.

"Some things have moved in a positive direction for me and I now look to benefit off the back of that next year." 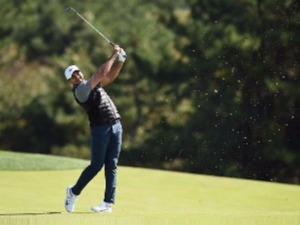