Golfer Marc Leishman's charity is helping the fight against coronavirus after his wife Audrey almost died from an acute respiratory illness five years ago.

Australian golfer Marc Leishman is doing all he can to make a difference to the coronavirus battle in his adopted US home while the PGA tour is on shutdown.

The global pandemic hits a nerve with the world No.15 after his wife Audrey almost died from acute respiratory distress syndrome (ARDS) and sepsis that put her in a coma five years ago while Leishman was preparing for the Masters at Augusta.

Patients with coronavirus can die from the same complications.

Leishman said it was important that Audrey, along with their three young children, were kept safe from the illness.

"She (Audrey) has to try not to get it," Leishman said.

"She's already had ARDS, which is what people are getting who get COVID-19 and that's what's killing them and putting people on the ventilators.

"So we know how bad that can be - she was lucky enough to survive it but we know that it's not just that bad stuff that happens in the hospital that affects you.

"It may be one or two or three years afterwards when you're trying to recover that's probably the hardest part about it.

"It's been tough for her but we're making the best of it and trying not to get it."

Leishman and Audrey set up the Begin Again Foundation after her illness and are using it to help hospitals and other groups in their local community in Virginia Beach.

He said they were providing meals for frontline workers at hospitals, including the one that saved Audrey's life, and also looking out for employees at supermarkets.

"There's about four or five big hospitals within a 30-minute drive and we're providing food for the ICU staff and also the emergency ward staff until the end of May," the Victorian said.

"We have also just ordered 1000 masks for check-out staff at supermarkets because we noticed how stressed they were looking.

"Just little things that can maybe help people's lives or reduce stress - we're doing what we can."

The PGA Tour is scheduled to resume with the Charles Schwab Challenge from May 21-24 at the Colonial Country Club in Texas.

Leishman thought whenever golf did return to tournament play it was likely to be played without galleries.

"The Tour hasn't said that but I think it would be a good first step," he said.

"But there's still issues with flights and airports and still a lot of people at a tournament without spectators like the cameramen, caddies, players and officials." 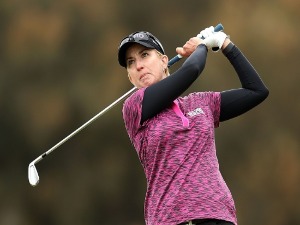