Australia's Cameron Smith has finished tied 24th in the PGA's Shriners Hospitals for Children Open, won in a playoff by Scot Martin Laird on Sunday.

Martin Laird lost a chance to win by making bogey on the 18th hole, only to redeem himself in a three-way playoff by making a 20-foot birdie putt on the second extra hole Sunday to win the Shriners Hospitals for Children Open.

Laird ended seven years without a victory in a year filled with so much doubt, which included knee surgery right about the time golf was set to resume from the COVID-19 pandemic.

He needed a sponsor exemption to play the tournament he won in 2009.

He ended it with a birdie to beat Matthew Wolff and Austin Cook. It was the third three-man playoff in Las Vegas for Laird, who won in 2009 and lost the following year when Jonathan Byrd made a hole-in-one on the 17th hole at TPC Summerlin.

Laird contributed a pair of big shots on the par 3.

He had a one-shot lead with two holes to play Sunday when he sent his tee shot on the par-3 17th off a cart path and some 30 yards right of the green with the pin to the right.

He hit a chip-and-run over the cart path, under the trees, between a pair of bunkers and then made a most improbable par with an 18-foot putt.

They all made par on the 18th in the playoff, and then Laird ended it on the 17th with his birdie.

Laird, at No. 351 in the world, becomes the third winner in the last four regular PGA Tour events to be ranked outside the top 300.

Now he has a two-year exemption, and he's headed back to the Masters in April and the PGA Championship in May.

"It's been a while since my last one, and you have some doubts at times whether you're going to get another one," Laird said.

"I just played so well all week. This week, tee to green, was probably the best I ever played. To see that putt (playoff) go in, it was pretty special."

Abraham Ancer birdied the last two holes for a 67 to finish alone in fourth.

Queenslander Cameron Smith shot a final round one-under 71 to finish eight shots off the leading trio.

Smith was the highest-placed Australian, his 15-under 269 earning him a tie for 24th.

Compatriots Cameron Davis and Matt Jones both tied for 52nd, with a 10-under 274 for the week. 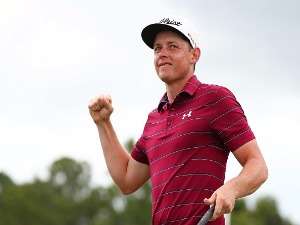