Dustin Johnson consolidated his status as the best golfer in the world by romping to victory at the Masters to join the list of multiple-time major champions.

Dustin Johnson was already the best golfer in the world before ridding himself of a choking tag.

Now, after smashing scoring records on the way to a dominant Masters victory, he has the chance to showcase his true greatness.

Johnson has been a force in golf for some time but, despite winning at least one PGA Tour event in every season since getting his tour card in 2008, including the 2016 US Open, his competitors sensed a weakness the 36-year-old couldn't shake.

Under the gun, in the big ones, he couldn't hold a lead. Under a blowtorch, he would fold.

Forget the fact he was the world No.1. He couldn't do it when it mattered. When it was expected.

As such, he reminds many of Australian great Greg Norman, who, for all his brilliance, only claimed two majors.

It was this fact that meant Johnson's resume of 23 PGA Tour wins, one major and a FedExCup title were considered by many as not enough reward for his prodigious talent.

Johnson had failed to convert his previous four 54-hole leads in majors and was 10 for 21 career from that position in all tournaments before his Masters breakthrough.

From the time he set up a three-stroke lead with a round to go at the 2010 US Open and shot 11-over 82 to implode, he has had collapses as part of his narrative.

There was the time Johnson was heading for a chance to win the 2010 PGA Championship but grounded his club in a bunker on the final hole, copped a penalty, and missed a playoff.

And the 2015 US Open where he faced a two-metre putt to win, slammed it past a metre and then missed the return putt for par to lose outright to Jordan Spieth.

Even just a few months ago he let Collin Morikawa over run him at the PGA Championship in San Francisco.

So when Sungjae Im turned the four-shot buffer into just one shot after five holes, things looked ominous.

Was Johnson replicating Norman's collapse of 1996 when he led by six only to lose by five at the Masters?

This time Johnson prevailed, ironically with the help of a putting tip from Norman, and his 24th PGA Tour victory cemented his place amongst the all-time greats.

It just might signal an opening of the floodgates given his 20-under total is the greatest Masters score ever and the equal-lowest under-par score in major championship history. 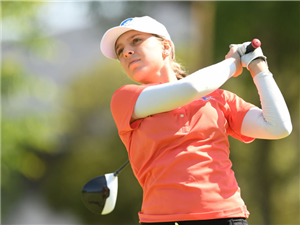