Strikers on a roll and eyeing BBL finals

Jonathan Wells starred with the bat and Henry Thornton wreaked havoc with the ball as the Adelaide Strikers thumped the Melbourne Stars in the BBL in Adelaide.

The resurgent Adelaide Strikers are looming as a BBL finals darkhorse after leaping to fourth place on the points table with a comfortable 23-run win over the Melbourne Stars at Adelaide Oval.

After posting 5-155, the Strikers banked their third successive victory after their attack, spearheaded by Henry Thornton (4-26), restricted the Stars to 8-132 in reply to 6-155 on Saturday.

Only a late assault from Hilton Cartwright (49) prevented a landslide defeat for the Stars, who got off to a flier before being strangled in the middle overs.

The Stars skipper should have been on his bike reverse-sweeping later that over when Fawad Ahmed grassed a regulation catch at backward point.

The damage wasn't too serious though and the Strikers were relieved when Maxwell's cameo ended via a 147km/hr thunderbolt from Thornton, triggering a 4-16 collapse.

Fawad redeemed himself when he was introduced in the powerplay and enticed Marcus Stoinis (1) to edge one to Short at first slip.

Thornton then picked up his second scalp when Harry Nielsen snaffled a one-handed, diving catch to dismiss Beau Webster (8) and have the Stars reeling at 4-37, leaving too much ground for Cartwright and Joe Burns (25) to recover.

Cartwright thumped Fawad for 24 in the 17th over - including three sixes - to give his side a faint sniff.

But the power-hitting counterattack came too late and the Stars' slender hopes ended when Cartwright was caught by Short in the deep off the impressive Thornton.

"It always makes it tough when no-one in the top four is there towards the back end to bat around," said Cartwright, who is hopeful Nathan Coulter-Nile will be recovered from his hamstring injury in time for Sunday's crunch clash with Brisbane Heat at the MCG.

"Everything's on the line tomorrow. If we drop that game, that's us done.

"It's more or less make-or-break."

Earlier, Jonathan Wells stroked a career-best 73 for the Strikers to move to second place behind Ben McDermott on the competition's run-scoring leaderboard.

Short thumped a brisk 33 at the top but the home side's batters were largely reined in before Wells went big late.

Wells dominated a 61-run fourth-wicket stand with the scratchy Jake Weatherald and crunched 40 of the Strikers' 50 runs from the last five overs to steal momentum back from the Stars.

"It was a huge game for us - two teams battling for that finals spot," Wells said.

"I think we've still got some improvement to do but you want to be playing your best cricket at the back end." 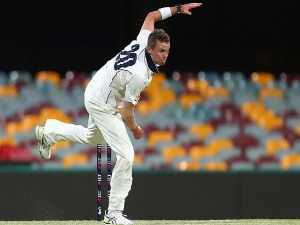