The AFL will decide within 24 hours when to start its condensed season, while Football Federation Australia says play will go on in the A-League.

The AFL will decide within 24 hours when to start its season as soccer crams the remaining A-League games into a shortened span to finish theirs.

The AFL campaign will be reduced by six weeks to 17 rounds, but officials are yet to decide if it will begin as scheduled on Thursday night.

As the NRL committed on Monday to staging round-two games at empty stadiums, AFL chief executive Gillon McLachlan says a decision will be made on his competition on Tuesday.

But the AFL has postponed all second-tier and junior talent competitions across the country until at least May 31.

"We are a game, but we're not the main game," McLachlan told reporters in Melbourne on Monday.

"The main game is looking after the community and keeping people safe and that is the clear priority for everyone at the moment."

McLachlan was confident the season would start on Thursday night but added: "Confidence is tempered by the fact so much changes so fast".

The AFL Players' Association will discuss the coronavirus pandemic with all players on Monday night.

Collingwood captain Scott Pendlebury has been tested for coronavirus after reporting flu-like symptoms, with results expected within 24 hours.

The pair had attended the high-performance centre at rugby's Sydney headquarters in the past week.

Rugby Australia has suspended all community rugby competitions and training until May but soccer chiefs are pressing ahead with the A-League season at closed stadiums, with the remaining six rounds condensed into a three-to-four-week period.

Wellington Phoenix and Melbourne Victory face an even bigger backlog of fixtures to complete their seasons as both clubs prepare to enter a two-week isolation period.

Third-placed Phoenix will fly to Australia on Tuesday and spend the next 14 days in quarantine, following government health and travel advice.

Wellington will play out the remainder of the season from a Sydney base.

Victory return to Australia from New Zealand on Monday and will also be isolated for the next fortnight.

Neither club will be able to train during the isolation period.

"Those two teams will have more of a challenge," Football Federation Australia's head of leagues Greg O'Rourke told reporters on Monday.

"But for the other nine teams, we're looking to have as many games as we can played with three-day turnarounds and have the season completed much quicker than it normally would have been."

That decision was deemed "a better solution" than suspending the league, he said.

The W-League grand final between Melbourne City and Sydney FC will proceed as scheduled this weekend, but without spectators.

The development came as the NRL committed to playing round two games in empty stadiums.

The Auckland-based Warriors remain in the northern NSW resort town of Kingscliff ahead of their Saturday fixture against Canberra on the Gold Coast.

Beyond that, Warriors coach Stephen Kearney said on Monday he was uncertain if his club would return to New Zealand and a mandatory 14-day isolation period.

NRL chief executive Todd Greenberg said the competition could continue even if the Warriors returned home.

"Of course we want all 16 clubs playing in the competition but that's a step ... we'll only get to that after this weekend," Greenberg told reporters on Monday. 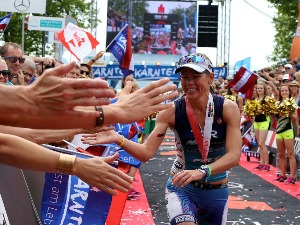