Australian Heather Marini has been appointed quarterback coach at America's Brown University, becoming the first female to do so in US College football history.

The 31-year-old, who grew up playing netball and tennis in Victoria's Goulburn Valley, is the first women's position coach in American Division I football.

Marini was dragged to a Monash University gridiron game 12 years ago to watch her future husband play which kick-started her amazing journey.

No other Australian has achieved the feat.

"People respect the fact I have come across the world to follow a passion of mine and therefore they are like, 'This girl is kind of crazy already so let's give her a chance to see what she can do'," Marini told AAP on Sunday from her home in Providence, Rhode Island.

"If you can prove yourself by working hard then they are going to give you another opportunity which is what happened here at Brown."

Marini, as quarterback coach, will oversee the most important position on an American football team.

"In one season with our program, Heather has done a great job for us.

"She has proven through her efforts in the office every day with us in an off-the-field role that she's ready to run the quarterback room."

Marini was not initially impressed with American football while watching future husband, Kieren Marini, play for the Monash Warriors back in the early days.

As their relationship blossomed Marini, who was studying for a degree in exercise and sports science and majoring in coaching, agreed to be the team's unofficial sports trainer.

When Marini returned to Monash she offered her services whenever the Warriors needed it.

"When the club decided they would have a women's team the coach sent me a text each day saying, 'No, you're not going to coach you're going to play quarterback for us'."

When Kieren Marini moved to the US in 2017 to advance his career as a cancer researcher at the University of California, San Francisco, Marini pursued football coaching opportunities.

In 2018 she earned a professional scouting fellowship with the NFL's New York Jets and a few months later Perry hired Marini to the offensive quality control position.

Marini said the key to her success is not being shy.

She asked football programs across the US, including Stanford, UC Berkley and UC Davis, if she could shadow their coaching staff.

"The coaches were open and wonderful," she said.

Marini's Australian accent does cause a little confusion.

"The thing with the accent is when you say over here 'I coach football' they say 'Oh, you coach rugby'," Marini said.

"I laugh and say, 'No, not that either. I'm from Melbourne where football is Australian rules'." 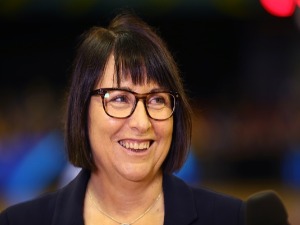