Diamonds defender April Brandley says juggling an infant and Super Netball is a new challenge as the only player-mum in the competition's Queensland hub.

Fitting training around breastfeeding is just one of the challenges of April Brandley's day after the Diamonds defender made a shock return to Super Netball this season.

Brandley had no plans to play this year, with baby boy Clay born in late February, but with the season start delayed due to COVID-19 she was lured back to the court as a training partner by Giants coach Julie Fitzgerald.

A few weeks later Brandley, her carpenter husband Jason, and Clay shifted from Sydney and into the Super Netball bubble in Queensland, taking advantage of Netball Australia's allowance for infant carers.

While a number of Super Netball stars are pregnant, Brandley is the only mum among players in the hub.

"If you asked me a month ago I thought there was no way I was going to play netball this season at all," Brandley told AAP.

"Julie gave me a call and asked me along to a training session and surprisingly I did OK, so I did a couple more sessions just to make up numbers and then the opportunity came up to travel with the team and we thought why not."

As an elite athlete Brandley, who was part of Australia's netball world cup team last year, said she liked order and routine but that was now out the window.

"I'm still breastfeeding him and he's not keen on the bottle at all so we have to plan feeding times and naps and all that," the former Magpies ace said.

"It's definitely a different experience jumping back in here as a mum and having Clay and figuring out the logistics behind that to even get to training.

"Clay's my main priority now but I couldn't done any of this without my husband, he's the MVP."

Brandley, who made her Giants debut in the third quarter of their two-point loss to the NSW Swifts, said she felt her body was still catching up with her brain.

"My body just feels so different and I'm working on getting my muscles and strength back," she said.

"I feel like I can still see the play but my body is just that little step behind. 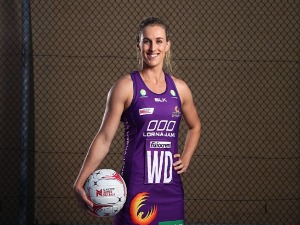