Junior Paulo has marked his return to the boxing ring in style with a TKO of Neville Costigan in Townsville's Footy Rivals fight night.

NSW and Parramatta prop Junior Paulo has marked his return to the boxing ring in style with a brutal TKO of former footballer Neville Costigan in Townsville.

Paulo, 27 gave the crowd at the Footy Rivals fight night their money's worth with a brutal overhand right to send Costigan to the floor.

The NRL star had not fought since his tight loss to Paul Gallen in 2016.

Costigan, 35, did well to weather the storm early in the fight, but at the beginning of round two he was clocked with a flurry of punches and hit the canvas.

"There was no footage of Neville or anything from his training, so I kind of expected what he was going to do," Paulo said.

"All I needed was to stay patient, stick to my game plan and let my hands go and fortunately it landed in my favour."

In an action-packed night at the Townsville convention centre, the men out of NSW had the upper hand across the bouts.

"I think based on what we saw tonight, there will be a few more (footy) boys itching to get in the ring after those displays," said Footy Rivals organiser Nick Livermore.

"I don't think anyone's going home disappointed tonight, and we will do it again.

"Townsville is the place to have this kind of event. The city has backed it, the people showed up tonight - there's no reason to go anywhere else."

"I would love multiple NRL players to come in because we showed it is safe, we showed that they can go and do a pre-season workout and come in and have a bit of fun and make some money doing it." 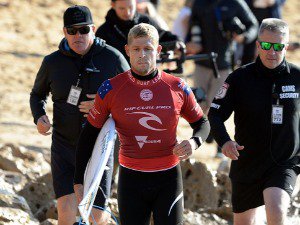