Tough love a key for Harper in NRL finals

Des Hasler's loyalty was never in doubt but it was tough love from Morgan Harper's partner that helped the centre bounce back from a nightmare NRL finals debut.

Morgan Harper always had the backing of his coaches while advice from Manly's mindfulness expert also helped after his nightmare NRL finals debut against Melbourne.

But ultimately, all he needed was some tough love.

"I've got my missus back here with me (in the Sea Eagles' Sunshine Coast camp)," Harper said.

"She knew I was pretty down, but she picked me back up and told me in a not-so-nice-way to pull my head in and carry on.

"She rides the wave as well, in the good times she's always happy.

"And in the bad times she's always there to pick me up and give me a solid personal review on the game."

By his own admission, Harper's finals outing against the Storm was not the night he wanted.

The 23-year-old spilled a ball for the Storm's first try, made two other errors and missed five tackles.

"I was pretty disappointed in myself, to be honest," he said.

At other clubs, Harper could have seen himself on the firing line - dropped for the following game to protect himself as much as the team.

But not under Des Hasler, who is loyal to his players to a tee.

Hasler rarely drops players, and so often they repay him for it.

It's why Harper's try and assist in Friday night's semi-final win over the Sydney Roosters is as much a reward for the centre as it was the veteran coach.

"Everyone around me got me up. And I knew within myself that I could turn it around. I just have to believe."

"Obviously the coaches are a big one. They helped me out a lot.

"We just reviewed everything and just said listen 'let's nullify what we got wrong. Let's be better and move on from it straight away' which was massive.

"I'm just grateful to be here, man, and to have a coach like (Hasler), it's unreal."

It also shows why Hasler brought Harper across from the Bulldogs last season, despite struggling to get a game in the battling club.

Harper has been part of the key in unlocking speedster Jason Saab on the right wing, but it's his defence that will be most crucial in this weekend's preliminary final.

The Manly centre makes the most one-on-one tackles in the competition, and his reads will be crucial in trying to shut down South Sydney's potent left edge on Friday.

"I'm excited for the challenge. We'll do some video during the week on ways to get around it," Harper said. 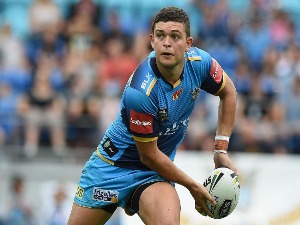