Jackson Hastings is looking to end a year to remember with a starring role in the English Super League grand final for surprise packages Salford on Sunday..

Eighteen months after being shown the door by Manly, Jackson Hastings has turned his life and career around to become the best player in the English Super League.

This Sunday (0400 AEDT) at Old Trafford, Hastings will look to guide perennial battlers Salford to a grand final boilover against runaway minor premiers St Helens in his last match for the Devils before joining Wigan next season.

The 23-year-old is also likely to be named in the Great Britain squad for the upcoming Tests against New Zealand and PNG - by virtue of an English grandmother - in what's been a year to remember.

The halfback's talent has never been in doubt ever since he burst through the junior ranks as the kingpin of St George Illawarra's NYC team.

In 2013 he signed for Sydney Roosters after rejecting an offer from the Dragons, following in the footsteps of his father Kevin who spent 12 years at the club.

However, Hastings' time at Bondi Junction ended on a sour note after he fell out with senior players and he was released from the final year of his contract to join Manly.

But his spell at the Sea Eagles ended when a drunken brawl with Daly Cherry-Evans led to him being ostracised by teammates.

After being dumped to reserve grade by Trent Barrett he came to the conclusion that he needed to get away from Sydney to fulfil his potential.

He was subsequently shopped around to Super League teams by his manager Sam Ayoub with only relegation-haunted Salford making a serious attempt to sign him - but it's a switch that has worked wonders for both club and player.

Outside of the Sydney fishbowl Hastings could focus fully on his game and prove to locals his troublemaking reputation was unfair.

He quickly won the hearts of supporters with some stellar performances and an approachable nature which, in addition to his work with the local community in Manchester, have earned him enormous praise.

"Rugby league has taught me a lot of very valuable lessons," Hastings said.

"What you can and what can't do and the sort of people in the game you have to be careful of.

"That is no disrespect to anyone I have come across, but I have learnt some very valuable lessons along the way and become a better version of myself.

"I don't care what people have thought about me in the past, that is their opinion.

"I have had that picture painted of me since I was a kid so I can't worry about that.

"All I can focus on is the picture painted of me right now and that's a good one."

Hastings was presented with the Man of Steel Award in front of his family on Monday in a moment he said he'd treasure for the rest of his career.

But he admitted it would be usurped by success on Saturday with a team who were rated as a 150-1 shot at the start of the season.

"To win and individual award like that with the names that have passed before me is very humbling," he said.

"I don't think I've done anything too special. I just turned up with the right attitude and the willingness to work hard. I pride myself with being the hardest worker in the room.

"Winning on Saturday with these lads would be incredible, we just have to believe." 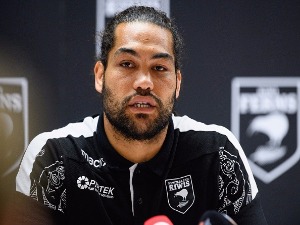 Rugby League
Updated 9 hours ago
Blair not set for NRL retirement just yet
Titans lose trial to Queensland Cup side
Burgess leads Rabbitohs to upset of Eels
Bullying victim to lead Indigenous team
Boyd locked in at centre for NRL's Broncos
NRL great concerned for Penrith's season
World Club Challenge: Previous results
Robinson 's Roosters ready for Challenge
Mitchell can be Hayne, GI at No.1: Daley
Bennett to step down for Demetriou in 2022