Cook certain Burgess will play on in 2020

South Sydney hooker Damien Cook has "no doubt" that captain Sam Burgess will overcome a shoulder injury to continue his NRL career next season.

South Sydney star Damien Cook has "no doubt" that captain Sam Burgess will run out next to him at the Rabbitohs next NRL season despite fears over his shoulder.

Burgess missed England's end-of-season matches in a bid to manage his shoulder, which required surgery midway through this year.

Rabbitohs coach Wayne Bennett was last week forced to downplay concerns over his star forward, with four years still to run on his contract.

And Cook, who has been in contact with Burgess since the end of the Rabbitohs' NRL campaign, was certain the 30-year-old would recover.

"Sam is probably someone that has brought himself back a couple of times early because we needed to have him back on the field to help us get to the finals.

"Now he just needs real good rest and hopefully he is just looking after his shoulder. We want to make sure first and foremost his health is there.

"You don't want any permanent damage to any player after their career and Sam has given his whole body to the game.

"But I've got no doubt he will be playing with us next year."

Cook's focus meanwhile is on Friday's Test against New Zealand, with the hooker to have the rare chance to play for Australia close to his home town.

A Helensburgh youngster, Cook will be one of the most popular players in just Australia's second Test to be played on the NSW South Coast.

"I played all my junior footy down here for the Helensburgh Tigers and Thirroul Butchers," Cook said.

"And then obviously with the Illawarra Steelers in Harold Matthews and SG Ball.

"WIN Stadium was my home ground, so to get the chance to go back there and wear the green and gold jersey, it's going to be a special night." 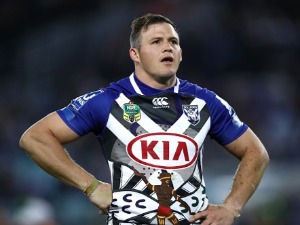