After fighting back from a leg complaint, Alex Glenn hopes to finally make his debut as Brisbane captain in next week's NRL trial against North Queensland.

Alex Glenn hopes to finally make his debut as Brisbane captain in next week's NRL trial against North Queensland in Cairns after fighting back from a leg complaint.

The veteran backrower was set to lead the Broncos for the first time at this week's NRL Nines after taking over the reins from Darius Boyd in the off-season.

However, he was forced to pull out after experiencing leg tightness at training before the team were set to fly out to Perth.

But Glenn was confident he would be fully fit for the Cowboys clash on February 22.

"I am really looking good. I had a heavy conditioning system on Friday and ran really well," Glenn told AAP.

"It's unfortunate to be out of the Nines, but I didn't want to go into the Nines with a niggle and then do something that prevents me from starting the new season (in round one).

"I had to do what is right for the team but I am making sure I am ticking all the boxes every day to get back soon because I want to be ready for the trial next week."

While Glenn said he would savour his captaincy debut, he saluted Boyd's response to his demotion.

He said the former Test fullback took it on the chin before quickly focusing on nailing down the left centre position for the Broncos.

Broncos led 18-6 at halftime after tries to Pangai and wingers Jon Reuben and Richie Kennar.

"Darius has been amazing. He's the ultimate professional," Glenn said of Boyd's reaction to being dumped as skipper.

"Every single day he is ready to go. His attitude hasn't changed despite me having the captaincy role; he has shone even more at training if anything.

"It has allowed him to focus on footy again."

Glenn believed left centre was the right fit for a revitalised Boyd.

"That's where he has been training. It is great for him because he is a big talker on the field," he said.

"On that left edge his talk will keep them on task on what they need to do. You want your centre talking, letting you know what shape you have ahead." 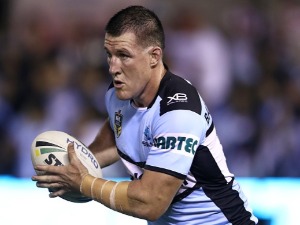