Parramatta have ensured the longest current losing streak in the NRL has continued by thrashing Gold Coast 46-6, while jumping to the top of the table.

The longest current losing streak in the NRL continued when Parramatta thrashed Gold Coast 46-6 at an empty Cbus Super Stadium.

The Eels jumped to a 2-0 season start to top the ladder, despite losing influential hooker Reed Mahoney (ankle) in Sunday night's first half, ensuring the Titans slumped to their 10th-straight loss as a home team.

Gold Coast were on the back foot from the outset when they lost captain Kevin Proctor to a hamstring complaint in the warm-up.

And their luck didn't change after kickoff despite somehow restricting the Eels to a 14-6 halftime lead.

Cynics could argue the Titans held a distinct advantage, hosting a match at a vacant venue due to the coronavirus pandemic, after playing for years in front of poor home crowds.

However, Gold Coast had no answer to the Eels who jumped to a 12-0 lead after just eight minutes.

The Titans looked to have finally received a break when winger Dale Copley crossed in the 14th minute.

However, he copped a late knee from Nathan Brown, which not only ensured the Eels' lock was placed on report but also earned the hosts a penalty kick to reduce the deficit to 12-6.

Copley failed to recover from the contact by Brown and did not return, cutting a forlorn figure on the sidelines with his ribs on ice.

It summed up the Titans' mood for the rest of the match.

Eels bench forward Kane Evans was enormous, bulldozing his way over for a 61st-minute try, while an equally impressive five-eighth Dylan Brown grabbed a second-half double as the Eels secured the result with a seven-tries-to-one effort.

The Titans have not won a match since round 13 last season, suffering a club-record 13-straight losses.

They have become just the sixth team in the NRL era to lose 13 in a row and first since Newcastle's 19-consecutive defeats in 2016-17, the longest losing streak in this period.

The Titans are creeping closer to the record 16-successive losses set in 1993 for all Gold Coast franchises.

"It's no excuse but it makes it hard when you lose your captain in the warm-up and and lose a winger to foul play," Titans coach Justin Holbrook said.

"But it was our dumb errors that made it escalate out of control - we have to be better than that.

"We had a good week at training but, from when we finish training to starting a game, there is something missing so we have to look at ourselves."

Parramatta coach Brad Arthur admitted the victory might have come at a huge cost with an injury cloud hanging over Mahoney.

"He will have to go off and get scans but he was pretty upset, the poor kid - I am not 100 per cent sure but it doesn't look good," he said. 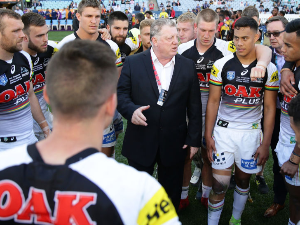