Rugby league great Phil Gould has warned all 16 clubs won't survive the suspended season, while NRL boss Todd Greenberg has flagged a potential bail out with richer clubs to support the vulnerable franchises.

All 16 clubs have woken to a new reality on Tuesday, with no football in the foreseeable future and a significant hit to their bottom line.

Several clubs have already been forced to stand down staff or place them on annual leave, with no-one safe as the clubs search for ways to save money.

The impact of the coronavirus on clubs who have previously walked the financial tightrope in the past could be dire.

And Gould, who most recently filled a role as general manager at Penrith, admitted he feared for several clubs' futures.

"If this competition doesn't get back on the field this year, and there is no broadcast income coming into the game, I don't know how clubs are going to survive.

"Unless the criteria is so small next year to come into the competition, that they somehow find themselves in it.

Without games being played, there will be no gate takings, corporate boxes sold and a significant dip in merchandise sales.

Nine clubs also have links to leagues clubs, which were indefinitely closed from Monday, sponsorships could also take a hit with a number of businesses doing it tough, while the NRL's losses could also impact grants.

The financial impact of the shutdown and what it means for clubs will be discussed at a meeting with executives and NRL bosses on Tuesday.

Greenberg said franchises would need to take a one-in, all-in approach to ensure all clubs come out the other side of the coronavirus crisis.

"To be fair, that's probably the conversation that has to happen in this period of time," he told Fox League on Tuesday.

"No matter how strong you are as a club, if you're the most successful or financially successful, you can't play against yourself. You need opposition.

"You need the strength of all 16 teams to make the competition as viable as we can.

"There has to be some give and take and the opportunity to prop some up, and others may need more help than others based on unique circumstances.

"There's a lot that I've learned in rugby league over the years but we do love a good debate and we do love a little bit of angst on the inside with the stakeholders, but at this moment in time I've never seen the game more united in the battle for our survival."

Gold Coast chairman Dennis Watt said the club is feeling vulnerable, but no more so than the rest of the game and the rugby league community.

"I think we'll be leaning on each other to find ways to get through," he told Fox League. 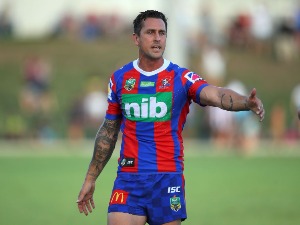