They were a bunch of truck drivers, sales reps, school teachers and plumbers captained by a GP that immortalised themselves in rugby league folklore.

They were famously and forever dubbed "The Entertainers" and Canterbury's 1980 grand final-winning skipper, Dr George Peponis, can barely believe it's been 40 years since the Bulldogs' unforgettable grand final triumph over the Roosters, then humbly known as Eastern Suburbs.

"There's been a lot of water under the bridge since then," Peponis told AAP.

Canterbury had won only two of their eight premierships - both as the Berries - before the class of '80 broke a 38-year title drought to spark delirious scenes among success-starved fans on that glorious Saturday spring afternoon four decades ago.

"I went home after the game for a couple of hours just to unwind - mum and dad lived just around the corner from Belmore Oval," Peponis recalled.

"When I went to the Belmore Leagues Club later for the celebrations I couldn't get in through the front door there were that many people there.

"They actually lifted me up in the air and handed me all the way up the stair case to the auditorium.

"It was the only way I could get in.

"It was an amazing feeling."

The crowd-surfing captain rightfully cherishes being part of one of the most special teams in ARL/NRL history.

Fans will surely never again see half a run-on team made up of brothers play together, let alone win a competition like the Bulldogs did with Chris, Peter and the great Steve Mortimer and Mark, Garry and Graeme Hughes.

Brotherhood apart, the Bulldogs enjoyed the luxury of a team overflowing with once-in-a-generation talents.

"We used to love nothing more at training than playing touch football," Graeme Hughes said.

He was a gifted sporting allrounder who also played first-class cricket for NSW as well representing his state in rugby league before becoming one of the country's most respected sports broadcasters.

"When you go on top of the six brothers, you look at the team and the predominance of the guys in the team played a hell of a lot of their football at five-eighth," he said.

"Steve Gearin played some footy at five-eighth, Chris Anderson was a running fullback and centre out on the wing, Steve Folkes played at five-eighth in junior rugby league.

But despite their dominant 18-4 grand final win over the Roosters, Canterbury's premiership-winning season of 1980 was not without challenges.

Homeless for the first half of the season while Belmore's new grandstand was being built, the Dogs were running eighth at the halfway point of the 12-team competition before winning 13 of their last 15 games to snatch the title.

"It was absolutely utterly unbelievable. The run through was quite staggering," Hughes said.

"There was a real bond.

"It's one of our greatest eras because of the romance of it and I'd like to think it was one of the most important turning points in the club's history."

Sadly, though, Hughes doubts the Bulldogs can even hold a major 40-year reunion in 2020 amid the coronavirus crisis.

"It's a bit hard to put a group of people, beyond two, together at present," he said.

But if it was a two-man reunion, the first players invited would be Greg Brentnall and Steve Gearin, the orchestrators and executioners of possibly the most memorable try in grand final history.

Few league diehards over the age of 45 will ever forget Gearin - eyes on the prize for some 20 metres on the fly - reeling in Brentnall's towering bomb to clinch the title, prompting unbridled joy from mild-mannered coach Ted Glossop on the sidelines.

Forty years on, Hughes hails Glossop's cool and calm as another key to the Bulldogs' success.

"His biggest attribute was he recognised what we could do and he used to give us just plenty of confidence to let us do what we wanted to do," Hughes said.

And they did it while all working day jobs and training just twice a week.

Hughes fondly remembers the Thursday night before the grand final and how Glossop and Bulldogs patriarch Peter "Bullfrog" Moore ushered the players into the sheds for a more important "session".

"They sat us all down and said: 'Listen, we've put enough beer on ice here for two beers each'," Hughes said.

"And we just sat around for another hour or more just quietly having a couple of beers talking about the year.

"Unheard of these days. Yet, for us, it was just another feeling of being so close to your teammates."

Two days later, there was one last twist for Glossop's men as Canterbury's reserve grade team beat Parramatta in extra time to secure their title.

With the overtime leaving only five minutes between games, Glossop quietly instructed his charges to "do everything you need to do and go and get dressed really quickly".

"But we were ecstatic that all our clubmates had won, which gave us a real high, and were all waiting for Ted Glossop to deliver his big speech - and he never said anything.

"We were all ready when the tap on the door came and he just turned to everybody and said: 'Well, you've seen what your reserve grade did. Go out and enjoy yourselves'. 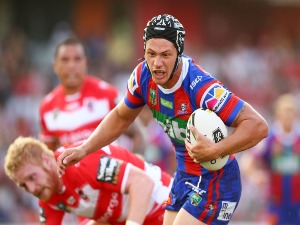