NRL welfare a must in bubble lockdown

Maintaining mental well-being for players and their families must be considered should the NRL isolate teams when the season resumes, a wellbeing expert says.

Welfare officers will be needed "more than ever" if players are isolated from families for over two months, according to a senior NRL club wellbeing expert.

All 16 teams could be quarantined under a radical proposal being considered to resume the competition during the coronavirus pandemic.

It would mean players would be separated from their families for a potential 14-week regular season that could start as early as late May.

Throw in a four-week finals series and a potential State of Origin campaign, and some players may not be back home until mid-October.

Parramatta chaplain George Dansey, who has been with the club for almost a decade, says the plan would create an enormous challenge for support staff.

"It's definitely going to bring wellbeing to the core because we'll be checking in every single day, not just with players, but partners and kids," Dansey told AAP.

"We'll definitely be needed more than ever, if and when it does happen."

The NRL has yet to nut out the details on how much staff would be allowed to stay in potential lockdown sites based in NSW and Queensland.

An innovation committee will discuss the idea when it convenes on Thursday, however Dansey says including welfare officers is a non-negotiable.

"They'll obviously limit the amount of support staff they'll need, but there definitely has to be some well-being personnel within that isolated community," he said.

"Players are used to being away for one-two weeks, but I'm not sure they understand. Being away for that long, it's definitely going to affect them."

Dansey is one of three welfare staff at the Eels to remain diligently working with players remotely, despite being stood down due to the pandemic last week.

The uncertainty around their future has prompted some Parramatta players to pick up the tools in a bid to source other income and maintain wellbeing.

However Dansey insists being holed up in camp with teammates for an extended periods will present a serious mental hurdle.

"The amount of mental toughness to go through, even if you've been there for a month to do training ... there's a lot there to fight," he said.

"Even just to offload and get off your chest. You've got to have someone there just to listen, someone to go, 'Okay, I've got you. Talk to me, so you don't have to take it into training and then the game, because that obviously affects the way you play."

Two-time premiership-winning forward Joe Galuvao, who was part of the wellbeing staff at the NRL for the past six years, says technology will help.

"But it's definitely better if the welfare staff are there," he said.

"There's things players can't disclose to coaches, and that staff member can be there and be a bridge not only to back to coaches, but families as well." 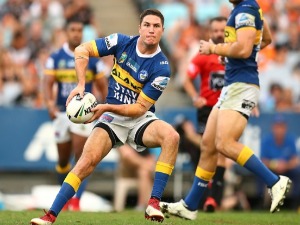