Brisbane skipper Alex Glenn says he has never endured such a difficult period at the club in 12 seasons as the Broncos had slumped to another NRL loss.

Brisbane captain Alex Glenn has spent 12 seasons with the club but never has he endured pressure like this.

The passionate skipper broke down in tears after the Broncos slumped to their sixth-straight NRL loss on Saturday night, ensuring more pressure to be piled onto coach and playing staff this week.

Amid a storm of criticism for a lack of results since the NRL season resumed, Glenn and Croft, a young half under enormous pressure to deliver, broke down.

"It hurts. I just got overwhelmed out there. Sometimes we get upset. It's been a tough couple of weeks because we know the effort we're putting into training," Glenn said after the game.

"It's just little areas in our games where we're lacking discipline. I just care for this club and care for the team so much and the emotions come out unfortunately.

"I'm not shying away from it - sometimes you shed tears."

It comes a week after players were criticised for smiling on the field after a loss to Gold Coast at Suncorp Stadium.

Young star Pat Carrigan said Glenn's leadership has helped the players to deal with the rising tensions as the club rallied to protect their mental wellbeing.

"Being one of those young guys, I wouldn't want to be at any other club or play for any other team or have anyone else other than Lexi as our skipper," he said after Saturday's 26-16 loss to the Warriors.

"It's disappointing for me seeing Lexi having been such a successful player for 12 years at the club but never gone through something like this, and I'm a part of that.

"If I or anyone else wanted to play an individual sport, we'd play tennis.

"I have great respect for Alex and everyone else in this team and, at the end of the day, we're not going to change.

"We're sorry for the results and we're in a results-based business and we need to win but, on Monday, everyone will be working their butts off to turn this around."

Glenn, too, is confident they can save their season.

"Since being here over 12 years, this is one of the toughest periods I've been through and it's frustrating but we're shooting our own foot," he said.

"I'd rather be the captain now going through this and testing ourselves out because, once we turn this around, it's going to be a hell of a story." 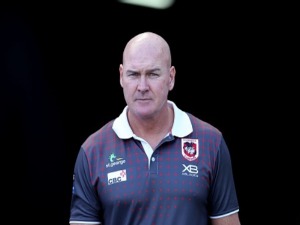