South Sydney star Damien Cook says Latrell Mitchell, who copped a two-match NRL suspension for striking, was merely sticking up for his mate.

Mitchell accepted a two-match ban on Sunday for striking Josh Reynolds in retaliation to the Wests Tigers five-eighth accidentally kicking Campbell Graham in the head in Friday night's match.

Just a week earlier, Tigers centre Joey Leilua was whacked with a four-match ban for a similar shot on Penrith fullback Dylan Edwards, and the club is unhappy with the disparity in punishment.

But Cook leapt to the defence of teammate Mitchell on Monday, saying there is a 'big difference' in the two incidents.

"Latrell saw his mate get kicked in the head and he reacted to protect one of his mates," Cook said.

"I don't think Dylan Edwards did anything prior to that to aggravate Leilua.

"I think there's a big difference.

"(Tigers) are obviously a bit dirty but the judiciary has dealt with both of them.

"We're going to be without Latrell now for a couple of weeks.

"He understands he did wrong and we just move on from there."

Cook said while the team is disappointed to be without the 22-year-old for the next fortnight, his retaliation against Reynolds was out of care for his teammate.

It's something the players respect, even if Mitchell got it wrong.

"He's just looking after his mate, he saw (Graham) get kicked in the head there and whether it was an accident or not, Latrell was there to back up his teammate and that's what we want to do at the club," he said.

"He probably didn't want to collect Josh in the head on the way to doing it but he's got his punishment now and we move on from there."

Souths forward Tom Burgess backs Cook's views on the incident and subsequent punishment, saying only Mitchell should be more careful in future.

"Latrell, he stuck up for his mate there, we like to see that but we don't want to see him suspended so he probably has to look at doing that a different way," he said.

Winger Alex Johnston is expected to play fullback against Newcastle and Canberra, as Souths look to get a grip on the top eight. 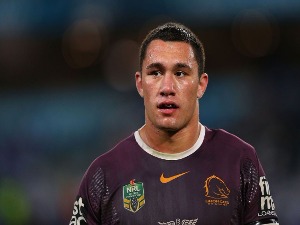