Snapshot of round 20 of the NRL season

All the details of the final round of the NRL season.

WHAT HAPPENED IN ROUND 20 OF THE NRL

* QUOTE OF THE ROUND: "I had a little tear well up when I seen the haka. I've seen it at Benji's wedding a couple of times in New Zealand, it's really powerful. A sign of respect." - Warriors coach Todd Payten on the haka for the retiring Adam Blair, as the club's five-month stay in Australia finally came to an end with a win over Manly.

* STAT THAT MATTERS: The Sydney Roosters will have to defy history to win a third-straight premiership after losing 60-8 to South Sydney. No team has ever conceded 50 points or more in a match and gone on to win the premiership.

* MAGIC MOMENT: AJ Brimson had already lit up CBUS Super Stadium with a breakaway 95m try against Newcastle on Friday but the Titans fullback stepping his way through five Knights on his way to his second in the 36-6 win surely sealed his first Queensland State of Origin jersey.

* MAN OF THE ROUND: Alex Johnston for his five tries against the Roosters. His second took his career tally to 100, his third put him in the Rabbitohs' top-five all-time try-scorers and his fifth gifted him the Ken Irvine Medal as the NRL's leading try-scorer of the year.

* TALKING POINT: What will come of Tyrone Peachey's claims he was racially abused by Newcastle's Mitchell Barnett? The NRL want the issue resolved quickly and are continuing investigations. Barnett has denied any suggestion of racism.

* UNDER PRESSURE: Newcastle's up-and-down form is a worry ahead of the finals. They looked nothing like a top-eight team in their 36-6 loss to Gold Coast. 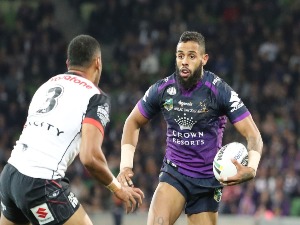