The career of AFL great Gary Ablett will carry on for one more game, next week's grand final against Richmond at the Gabba.

Geelong veteran Gary Ablett's storied AFL career will end on the biggest stage with the Cats through to next Saturday's grand final.

The dual Brownlow Medallist was an influential figure in the Cats' 40-point win over Brisbane at the Gabba as they secured a spot in the premiership decider against Richmond.

It means the 357th and final game of Ablett's honour-laden career will be a grand final and a chance at a third premiership.

The 36-year-old played a key role in getting the Cats over the Lions, showing all of his big-match experience in the third quarter.

The eight-time All-Australian kicked his first goal after a clear throw from Patrick Dangerfield that was missed by the umpires but his second was all class.

Bursting clear from a centre bounce, Ablett carried the ball forward to the 50m arc and unleashed a right foot kick which just had enough distance to get through.

In the end Ablett finished with 14 disposals and four tackles in the match as well as his two goals. 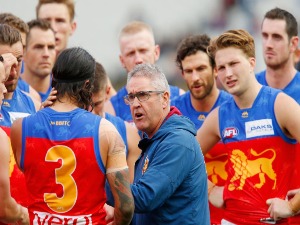