Penrith coach Ivan Cleary denied his side's momentum has been halted after a week off heading into Saturday's NRL preliminary final against South Sydney.

Ivan Cleary says the way Penrith bounced out of the COVID-19 break is proof enough a week off won't disrupt their sizzling NRL form when they face South Sydney on Saturday.

The Panthers are on a 16-game winning streak and earned a week off coming into the grand final qualifier, but Cleary is confident there is no change in momentum.

And the stats back him up.

Under the current finals system, which started in 2012, when the minor premiers have won in week one they have gone on to win their preliminary final all five times.

"The way we have trained throughout the year, we've had two pre-seasons I guess... the original one and coming back from the COVID break," he said on Friday.

"We were able to pick up our game straight away after that.

"I don't see any reason why it won't be the case this week."

The Panthers won the first two games of the NRL season before playing out a 14-all draw with Newcastle in a bruising clash without star halfback Nathan Cleary.

The minor premiers then dropped just one game for the rest of the season as they romped to a record-breaking winning streak.

They will need all the momentum they can muster against a Rabbitohs side that has score 144 points in their past three games.

However, the Panthers will be without a star when they face Souths at ANZ Stadium on Saturday with second-rower Viliame Kikau serving a one-match suspension.

It has opened the door for Kurt Capewell to make his return to the field on the left edge after a knee injury forced him out of the side earlier this year.

"We don't expect him to be Kiks," Cleary said.

"It's hard to replace that style of player, Kurt will play his own style of game which we brought him to the club for.

"He was a starter in our team before he got seriously injured against Parramatta and since then Liam Martin has taken his role and blossomed.

"It's a great opportunity for Kurt. He's come back in the last few games and filled in where he can." 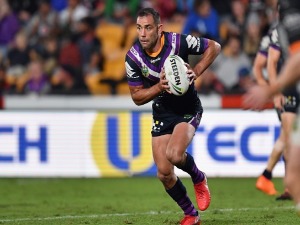