South Sydney have had the most damaging attack in the NRL club's history in 2020 but Penrith finally found a way to shut them down to reach the grand final.

After all they'd done in the past months of this NRL season, South Sydney were never going to go down without a fight.

Because as master coach Wayne Bennett put it last year week, "they don't know when they're beaten this mob".

This was a team that had come back from 14-0 against Newcastle and 18-8 against Parramatta to come through the first two weeks of the finals.

So when they trailed 14-6 and 20-12 at different points in the second half of their preliminary final against Penrith, it was never safe to write them off.

And for a brief few moments on Saturday night it looked like Souths were going to pull off the impossible.

Down by eight with as many minutes to play, a Cody Walker ball collected Corey Allan's foot, allowing the stand-in winger to chase it down and score.

Then when Adam Reynolds appeared to have kicked a 40-20 with three minutes to go, it almost appeared as if it was inevitable.

But by some cruel twist of fate, Reynolds' non-kicking left foot had landed on the 40-metre line and he was denied.

And with it went Souths' best late chance, before their season ended with a 20-16 defeat to the Panthers.

Coming back against a Penrith side that has now won 17 straight was always going to be the toughest of asks.

What couldn't be denied though was that these Panthers had done their research.

While Bennett claimed last week he'd barely watched Penrith all year, it was clear Ivan Cleary had been studying Souths.

They gave the Rabbitohs' lethal edges nothing in the first half, holding their ground against their outside men before killing their attack off.

On Souths' first real shot at creating numbers on the right edge, they pulled themselves up short over fears of an obstruction.

Walker later dropped a ball cold when he looked to have numbers on the right, while Josh Mansour rounded Jaxson Paulo into touch on another attacking raid.

Finally in the second half the Rabbitohs were able to get some fluency with both tries coming down the edges.

But by then the job Penrith had done on their key men was too good.

Walker ran just 73 metres, and didn't have a linebreak for only the second time in the past eight games.

Damien Cook was given even less room out of dummy-half, with just one run for five metres - his worst return of the season.

And with that, Penrith had done what no other team could for the past month.

They shut down the most damaging attack in Souths' proud history, and with it booked a spot in their first grand final in 17 years. 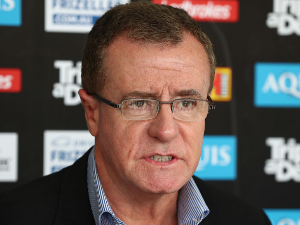