Ruckman Toby Nankervis has been a key figure in Richmond's latest AFL premiership pursuit since returning from an ankle injury.

Toby Nankervis admits it took him a few weeks to readjust after his two-month injury lay-off this season but has hit top gear in time for Richmond's shot at another AFL premiership.

The big ruckman is one of several key Tigers - along with Dion Prestia, Bachar Houli and Shane Edwards - who missed long periods of football during the difficult campaign.

But the quartet have timed their runs perfectly and shape as important figures in the grand final side after helping Richmond outlast Port Adelaide in a thrilling preliminary final on Friday night.

Nankervis, who delivered a telling contribution with a series of match-saving marks, was omitted early in the season before being sidelined by an ankle syndesmosis injury.

He stayed home in Melbourne to rehabilitate when most of his teammates first headed north to their Gold Coast hub.

But he returned to action in round 14 and hasn't looked back since, leading the ruck division on his own after Ivan Soldo went down with a season-ending knee injury in round 17.

"It sort of did take me a few weeks to get match-fit and I feel like the more footy I've played the more I feel I can run out games," the two-time premiership ruckman said on Saturday.

"It was disappointing to get injured early on in the season with the difficult season we've had, being away from the group for different parts.

"I'm so rapt to just be back within the team and give ourselves another chance.

"We're all just grateful to get the opportunity to play footy after some pretty difficult times early on."

Nankervis was huge for Richmond in the preliminary final win.

He stood up in the final quarter with five disposals, nine hit-outs (five to advantage) and three intercept marks.

"I didn't really know how long was left and it was pretty tense for the last four or five minutes there," Nankervis said.

"It was a great game of footy."

Nankervis plans to watch the Brisbane-Geelong preliminary final with teammates and said he isn't concerned about the result. 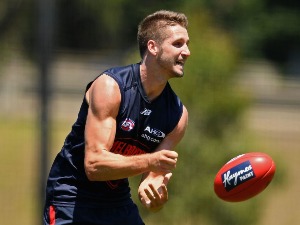