Dylan Brown has become one of the big winners of the NRL's COVID-bubble bursting, finally eying a season of working hands on with Andrew Johns at Parramatta.

Dylan Brown didn't know who Andrew Johns was seven years ago, but he now believes the eighth Immoral can take his game to the next level in 2021.

Brown stands to be one of the biggest winners of the NRL's COVID-bubble bursting, with Johns finally back on the field at Parramatta training.

Signed as a halves coach at the start of last year, Johns spent most of 2020 yelling over the fence to halves Mitchell Moses and Brown at training.

But the NRL's relaxation on restrictions has seen several big stars return to clubs, including the likes of Cooper Cronk, Michael Ennis and Johns.

And the impact has been immediate on Brown, who has a halves mentor working with him on the field for the first time in his career.

"He shows us so much," Brown said.

"It's weird, he comes to training and he's almost teaching us the same thing every day.

"But I think that's what he's trying to ingrain in us. It's not the big play, it's the little things. And it's working on them every time.

"Just something as simple as the pass out the back. We'll work on it for 10 minutes straight.

"The things that you forget and don't think about when you're playing. That's the stuff you have to look at."

That experience is expected to be even more important for the Eels, who need a statement season after two disappointing finals exits.

The NRL's new rules should also suit them, with Brown and Moses playing at their best in up-tempo football.

"You're not going to really know what's working and what's not until you're in season - until you test things out," Brown said.

"And each week teams are going to start reading different things.

"When I am playing that'll be big (with Johns there). He'll be able to see my video, give me tips."

Brown is renowned for not knowing his rugby league history, having grown up playing union in New Zealand.

He's previously been caught asking Brett Kenny to repeat his name, and only learned of Johns when he started watching league as a 13-year-old.

"He is involved in NSW and that sort of thing, like Matty Johns or Freddy Fittler. People like that."

"He'll show us up. He grabs the ball and puts it on the dime straight away.

"He comes to training with a sore back and just goes and kicks it 40 metres. He's the eighth for a reason." 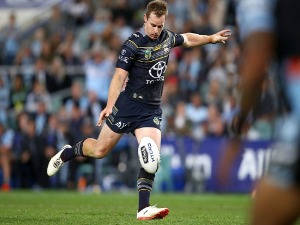