Newcastle coach Adam O'Brien has poured cold water on reports Kalyn Ponga is set for a contract extension and a shift to five-eighth.

Newcastle coach Adam O'Brien has hosed down reports Kalyn Ponga is shaping for a long-term contract extension and a shift to the halves, saying he has no plans to move the star fullback any time soon.

The Queensland fullback is contracted with the Knights until the end of next season but has options in his favour for 2023 and 2024, with reports emerging this week that he's close to signing a bumper extension.

An extension would end speculation of a move to rugby union for the 23-year-old - who is considered among the brightest NRL stars in the game and vital for the Knights to keep on the books.

"I can honestly say that it hasn't come across my desk at all, around the extension of the contract or the five-eighth role," O'Brien said on Thursday.

"All I know is that he's healthy to play this week and that's about as much as I can honestly tell you on that.

"I haven't had any discussions around any of that."

An eventual shift to the No.6 role was flagged previously, with Ponga playing a three-game stint in the halves at the start of 2019 before the experiment was quickly abandoned.

"I see him as a bloody good fullback at the moment and I'm not looking to move him any time soon," O'Brien said.

"I'll concentrate on the right now and worry about the what ifs later."

Ponga played just 32 minutes in last week's 48-4 loss to Melbourne but has passed concussion protocols to face the Sydney Roosters on Friday night.

David Klemmer, however, will miss the clash due to serious headaches after a concussion last week, with Jesse Sue to take his place in the Knights side.

Former Test prop Klemmer is added to an injury list that includes Bradman Best and Mitchell Pearce, although all three are expected to return against Canberra in round 20.

"It's a little bit risky with Mitchell, it's low grade (hamstring) but we've got some really important games at the back end of the year and to push him could be dangerous there," O'Brien said.

"I'd rather be smart and play the long game."

After the heavy loss to the Storm, O'Brien dropped second-rower Lachlan Fitzgibbon to make a statement as the 10th-placed Knights push for a finals finish.

"There's parts of Lachie's game that he needs to work on and he'll do that through training, he won't do that this weekend," O'Brien said.

"There's a lot of guys there who understand we're coming into some pretty important games at the back end of the year for our future and we need guys who are playing well and consistently training well." 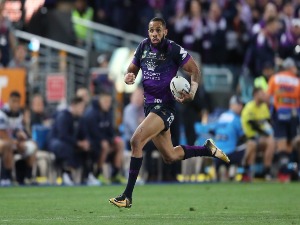