Josh Aloiai has tested positive to COVID-19, becoming the first NRL player to contract the virus and now forced to call off his boxing bout with Paul Gallen.

Josh Aloiai has become the first NRL player to contract COVID-19, after his positive case prompted the cancellation of his boxing bout with Paul Gallen.

The Manly forward, who is fully vaccinated against the virus, had spent his off-season preparing for the high-profile fight in Newcastle next month.

But he became unwell earlier in the week, before tests confirmed he had caught the virus.

The bombshell revelation has not only forced the abandonment of Aloiai's slated heavyweight blockbuster with Paul Gallen in Newcastle next month, but also the cancellation of the entire December 9-10 double header.

"All patrons who purchased a ticket for the event will receive a refund through Ticketek," No Limit Boxing promoters said in a statement.

"No Limit Boxing is working on an alternate card that will feature some of the biggest names in Australian boxing, including Andrew Moloney and Harry Garside."

Manly have also since confirmed Aloiai had not been in contact with any club mates, with the 26-year-old not due to return to the Sea Eagles' Narrabeen base until next month.

"Josh was not due to return to official team training until mid-December and has had no recent face-to-face contact with his Manly teammates.

"Josh is fully vaccinated and the club is working with the NRL to ensure he follows NSW Health Orders and NRL protocols over the coming weeks."

While Manly's entire squad is believed to have had at least their first vaccination against the virus, just under 15 across the NRL are yet to have their first dose.

The NRL remain hopeful that number will be down to around five by next March come kick off, with unvaccinated players unable to play in Queensland, Victoria or New Zealand.

Clubs are continuing to weigh up how to treat unvaccinated players, with Canterbury having sent John Asiata a termination letter if he does not receive the jab.

Penrith coach Ivan Cleary meanwhile said he would not pressure Apisai Koroisau into the vaccine, after he missed out on the Panthers' premiership parade on Saturday while unprotected.

Aloiai's positive test came as the AFL also had its third case on Wednesday.

The Giants said the case was not related to one in their AFLW program which was confirmed on Tuesday, with a handful of cases also confirmed across the women's league.

"The positive test was confirmed after the club implemented additional testing requirements for AFL players and staff ahead of their return to pre-season training next Monday," the Giants said in a statement. 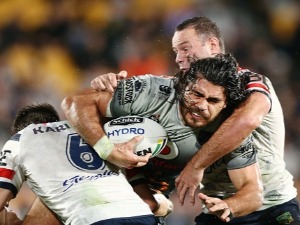