Newcastle have Anthony Milford available for selection and the former Brisbane playmaker could face his old side in his first game back at NRL level.

Newcastle are considering throwing Anthony Milford straight into first-grade action against former club Brisbane next Thursday after their drought-breaking win over Canterbury.

Milford signed with the Knights last month after his deal with South Sydney fell through following an incident on a night out in Brisbane last year.

The Samoan international was given the green light to return in round 11 after he pleaded guilty to counts of public nuisance and wilful damage. Milford was cleared of three counts of assault.

Knights coach Adam O'Brien didn't want to put a downer on the players who had helped snap their seven-game losing streak with a 16-6 win over the Dogs by confirming Milford would walk into the side.

"He has trained a lot and I think every time he turns around, there is one of the physical performance staff standing in front of him.

"He has bought in and added a hell of a lot, his attitude is unreal."

Milford could play either as a five-eighth alongside Adam Clune or be used off the bench.

Newcastle play Brisbane in the Hunter on Thursday and are aiming to make amends for their last two home games where they were unable to score a try in big losses to Parramatta and Melbourne.

Their attack was still clunky but in a heartening sign for the Knights big winger Edrick Lee crashed over at Suncorp Stadium for his first try since the 2020 Origin series win for Queensland.

Lee was sidelined for all of last year following complications with a broken foot.

"That Origin was the highlight of my career and I've played a couple of games back in the top grade and haven't managed to score a try," he said.

"To score back here was good. I feel like I'm getting back to my normal game and I'm rekindling that fire.

"Unfortunately results haven't been going our way and we have worked hard to simplify things and got the result tonight." 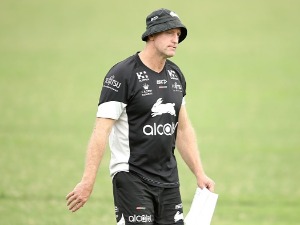