NSW Waratahs coach Rob Penney has hailed Michael' Hooper's opening round Super Rugby effort as unbelievable and says he could lead the side again in the future.

"Super" Michael Hooper remains the heart and soul of the NSW Waratahs and could easily captain the team again, according to coach Rob Penney.

Having relinquished the Waratahs captaincy this season, Wallabies skipper Hooper turned in what Penney described as an unbelievable performance in last weekend's opening round Super Rugby loss to the Crusaders.

"He's had two months off since the World Cup and had 50 minutes (in a trial) against the Reds, and then to play like that for 80 minutes, incredible," Penney said.

"As we know he's a super man in more ways than one."

While lock Rob Simmons has the captaincy after Hooper opted to stand down, Penney did not rule out the openside flanker regaining it in future seasons.

"I guess the idea behind relinquishing the captaincy was to freshen him up and see the game through a different set of eyes and a different role," he said.

"Geez, if we can get performances like that out of him over the next three or four years and he doesn't have the C badge on, then it'was a great decision.

"The captaincy thing is not always and forever, he could easily have it back at some point."

Former NRL forward Tepai Moeroa is poised to make his Super Rugby debut off the bench for the Waratahs in Saturday's home game against the Blues in Newcastle.

Moeroa, who played over 100 first-grade games in six NRL seasons with Parramatta, can fill either of the centre positions, though 12 is the most likely.

"It's early days for him but he's a big strong man, he's got a good skill set and his game understanding is what has really grown over the last month," Penney said.

"We think the time is right now to see if it's grown to a good enough level to contribute positively.

"We think he will. If we're right, then we've got another great bit of talent and depth in that midfield position, that is going to be very strong for us."

Wallabies backrower Jack Dempsey has been promoted to the starting team at No.8, with Jed Holloway dropping to the bench, while prop Harry Johnson-Holmes is back after sickness forced him out of last week's team. 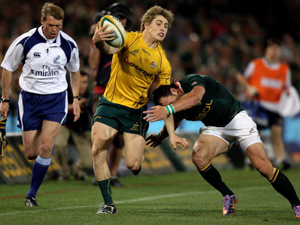