All 23 Melbourne Rebels players have been retained to face the Lions, rewarding their Super Rugby triumph against the Highlanders.

The Melbourne Rebels have named an unchanged team for the first time in five years as they set their sights on another historic Super Rugby win, this time over the Lions.

The same 23 who conquered the Highlanders in Dunedin for the first time last week has been retained for Saturday's match at AAMI Park.

Melbourne have never beaten the Lions in any of their five meetings but skipper Dane Haylett-Petty said their confidence had taken a boost from last week's 28-22 victory across the Tasman.

"We just showed a lot of heart. That second half wasn't perfect, I think it was 33 per cent possession against a good attacking team, but we were able to survive it," he said.

"Everyone turned up, did their bit and stayed on task, so I think it's great those boys get rewarded for that and get another go."

Test hooker Jordan Uelese must bide his time again on the bench in his return from a hamstring injury, after starting rake Anaru Rangi unleashed a storming game last week.

Lock Matt Philip, arguably Melbourne's best performer in Dunedin, will play his 50th game for the Rebels, on his 26th birthday.

The Rebels will strike a Lions side who were outgunned from the outset in a 29-17 loss to the Waratahs in Sydney last week. 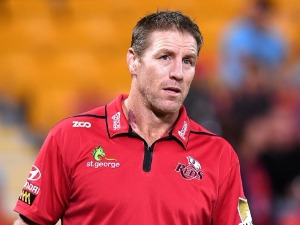