Ned Hanigan has impressed coach Dave Rennie to earn a start in the Wallabies backrow against the All Blacks in the second Bledisloe Cup match.

Ned Hanigan has been a revelation for Dave Rennie and the Wallabies coach is counting on the backrower also surprising the All Blacks in the second Bledisloe Cup Test on Sunday in Auckland.

The 25-year-old will start at blindside flanker at Eden Park after almost two years in the Wallabies wilderness.

Playing lock for the Waratahs this Super Rugby AU season, Hanigan will help strengthen the stuttering lineout, while Brandon Paenga-Amosa is the new starting hooker with Folau Fainga'a a "casualty".

A noted workhorse, Hanigan also offers plenty over the ball, which was also a weakness for the Wallabies in the 16-16 draw in Wellington.

Rennie said that 25-year-old Hanigan had forced his way into the side with his efforts at training, with Harry Wilson shifting to No.8 and Pete Samu cut.

"Ned has been really impressive and has trained superbly in the four weeks that we've been together," Rennie said.

"He's done a lot of work around the All Blacks and the opposition stuff leading into last weekend's game.

"He's a good athlete and has a good skill set and provides a point of difference for us at six and allows us to move Harry back to eight."

Hanigan has copped plenty of hate from Wallabies fans for a perceived premature elevation to the Test side in 2017 by then coach Michael Cheika ahead of more deserving rivals.

Helped by a laconic Aussie drawl, the country boy has won over Kiwi Rennie, who said that Hanigan had been the biggest find in the 44-man squad.

"He's had a real edge about him at training.

"We've done a lot of contact work and he's been a stand-out and he's a really good leader and lineout forward and we think all those elements are important this week." 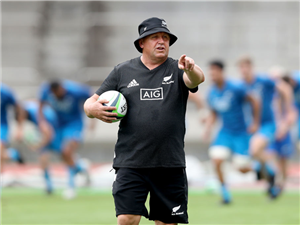