Waratahs and Rebels in high-stakes battle

The NSW Waratahs and Melbourne Rebels are both desperate to win their final-round Super Rugby AU game on Saturday night for vastly different reasons.

There is so much more than the Weary Dunlop Shield on the line when the NSW Waratahs host the Melbourne Rebels in a high-stakes Super Rubgy AU clash in Sydney on Saturday night.

With NSW staring down the barrel of an historic winless campaign, all the heat would ordinarily be on the Waratahs to finally deliver a precious victory for their dwindling number of diehard fans.

But the Rebels - and more specifically besieged coach Dave Wessels - are under even more pressure as they strive desperately to scrape into the three-team finals series after enduring their own rueful season.

Wessels' men are languishing in fourth spot with a 2-5 record that could so easily have been 5-2 had they not lost four games at the death.

But an inability to close out tight contests and an attack that has manage to yield only 10 tries in seven games has left the Rebels and Wessels under the gun.

Nothing less than a win at Bankwest Stadium will be enough to clinch a finals spot - and a do-or-die showdown next Saturday against the Brumbies - and seemingly save Wessels from the sack.

"We've got to win it," the Rebels' sidelined captain Dane Haylett-Petty said on Friday.

Frustratingly, we've come close in four games and lost in the last play of the game or the last couple of minutes.

"We know we're good enough to beat anyone but it's just about doing it on the day now."

Haylett-Petty, who hopes to be available if the Rebels squeeze into the finals after finally recovering from concussion symptoms, said the side "definitely, definitely" still backed Wessels.

"Dave's a great coach. He's a great leader so the players are right behind him," the Wallabies star said.

"I'm sure there'a a lot of pressure but you can't tell.

"He's in a great mood and very excited about the challenge ahead."

But the Rebels' finals fate could already be out of their hands even before kick-off.

They trail the Western Force by two competition points, with the Perth-based side hosting the Queensland Reds on Friday night.

"Obviously it's a big game for us. Frustratingly we've put ourselves in a tough position where it's a little bit out of our hands," Haylett-Petty said.

"I think a lot of the boys will be screaming at the TV tonight and be ready to go tomorrow."

Not surprisingly, the Waratahs are equally intent on winning.

"We've obviously spoken about improving each week and we've done a great job of that recently.

"But we're still chasing that 'W', especially with the trans-Tasman competition upcoming.

"We need to build some confidence so we can really hit the ground running there." 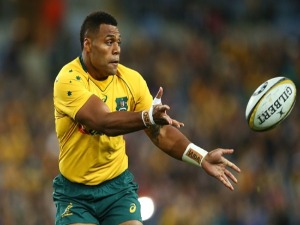