Wallabies great Stephen Larkham is tipped to take over as Brumbies coach for 2023 after announcing he won't take up a new deal with Irish club Munster.

Stephen Larkham has turned his back on a coaching extension with Irish club Munster, paving the way for his return to Super Rugby with the Brumbies.

Larkham, who joined Munster as senior coach in 2019, has announced he will be returning to Australia at the end of the season next June for family reasons.

Current Brumbies coach Dan McKellar, will oversee the side in Super Rugby Pacific next season before relinquishing his role to focus on the Wallabies, where he is forwards coach under Dave Rennie.

Larkham, 47, said it was time to put his family first and take up a "coaching opportunity closer to home".

"I only recently spoke about my desire to remain with Munster and continue working with my fellow coaches and playing group," the former Wallabies great said in a statement.

"That hopefully gives some indication as to how difficult a decision this has been for me. The staff, players, fans, and facilities are world class here and I am grateful to have had this opportunity.

"My family made a number of sacrifices in joining me on this move to Ireland and my girls' adjustment over here, particularly with COVID, has been difficult.

"I have to put them first now, and with a coaching opportunity closer to home this is the right thing for my family at this time."

The Brumbies are yet to announce McKellar's replacement but it's believed favourite son Larkham, as well as Japan-based Simon Cron, were the frontrunners.

After 127 appearances for the Brumbies and 102 Test caps Larkham's coaching career began in Canberra in 2011 before he was elevated to the head coach role at the Super Rugby side.

He joined then Wallabies' coach Michael Cheika's 2015 World Cup campaign as attack coach, splitting his time between the Test and Super Rugby role.

Larkham then joined the Wallabies coaching set-up but was controversially sacked by Cheika in early 2019 after a string of poor results. 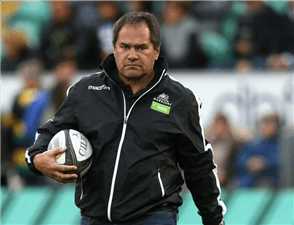