Coach Carl Veart is confident Adelaide United are tracking in the right direction but they need fine-tuning ahead of their push for an A-League finals spot.

Adelaide United are winless in five A-League games but coach Carl Veart is confident the Reds aren't far off their best.

The Reds slipped to a 4-1 loss to Melbourne City at AAMI Park on Thursday night but had some promising moments throughout.

Veart said he'd "never really felt under any threat" when City had the ball but he was left to lament poor decision making and execution in attack, while City's first two goals both came from short corners.

"At times it's the pass is under-hit, or it's hit to the wrong side, or the cross is not quite in the right area.

"We had some really good opportunities to get close, and we didn't take them and then they took their opportunities at the other end."

Thursday night's game was the first of four in 11 days, with the Reds facing a short turnaround before hosting Brisbane on Sunday.

Adelaide then travel to Perth to face the Glory on Wednesday, then take on Melbourne Victory away next Sunday.

Veart said with the short turnarounds in mind, fringe Socceroos striker Tomi Juric had been deliberately managed when he was substituted at halftime.

"Tomi is still having a few issues with his calf," Veart said.

"So the idea was that he wasn't gonna play a full game tonight because we've got a lot of short turnaround coming up.

"So it's important that we manage the playing group."

But goalkeeper Joe Gauci is poised to miss at least a couple of weeks after injuring his quad in the warm-up.

"We think he's torn a muscle in his leg in the warm up when he was kicking a ball," Veart said.

"So it was unfortunate. It could be a couple of weeks, I'm not sure.

"We'll have to wait until we get back and have a scan and see how bad it was." 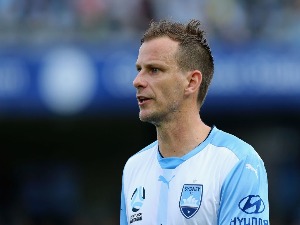