Brisbane Roar recruit Scott McDonald will be unable to face former club Western United in a crucial A-League clash next week due to a clause in his contract.

Brisbane Roar will have to face Western United next weekend in a crucial A-League clash without recruit Scott McDonald.

The veteran forward, who played a leading role in the Roar's 2-1 win over Adelaide United at Suncorp Stadium on Saturday, has revealed a clause in his contract will prevent him taking on his former club.

The Roar's victory over the Reds leapfrogged them above the A-League newcomers into sixth spot on the ladder.

It means next Sunday's clash at Mars Stadium in Ballarat is a massive one in both club's finals aspirations.

McDonald joined the Roar in January on an 18-month deal after being granted a release by United, where he made just nine appearances for the expansion outfit.

Part of that move however includes a clause which means he won't be able to take part in next week's match.

It's a blow for Roar coach Robbie Fowler, who hailed the 36-year-old ex-Socceroos' impact in his short time at his new club.

"All season we probably lacked someone to hold the ball in the final third and bring others into the game," Fowler said.

"We've gone out and got Scotty and, look, I think he's been incredible ... I'm not talking about his performances, just being the way he is with the lads.

"We're demanding as a staff, we'll always demand but also when you've got players on the pitch in certain areas who can demand a little bit from the players as well, I think that's what we want. He's been a fantastic signing."

McDonald was pivotal in both of Brisbane's goals against Adelaide, including a dinked cross for captain Tom Aldred's winner.

The first goal was scored by 20-year-old Mirza Muratovic after a goalmouth scramble started when McDonald forced his way into the box.

Muratovic's first A-League goal in his sixth appearance thrilled Liverpool legend Fowler, who knows plenty about how important getting off the mark is for a young striker.

"We're delighted as a club because getting your first goal is special. It really is," he said.

"I know that he'll remember me for something good now, giving him the good start. That's what we're pleased with

"Good luck to the kid and hopefully he'll go on and score a load more." 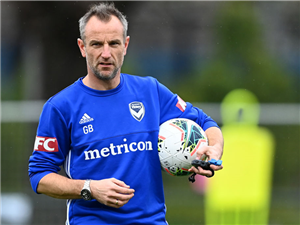