Socceroos great Mark Viduka has revealed he could easily have joined AC Milan at the peak of his powers, but Leeds elected not to sell him.

Socceroos great Mark Viduka has revealed how he almost joined AC Milan during his exceptional run of form with Leeds United, and Manchester United during the club's heady days under Sir Alex Ferguson.

Viduka scored 17 goals in 34 Premier League appearances for Leeds in the 2000-01 season, while he also scored four Champions League goals in their run to the competition's semi-finals.

He revealed AC Milan had been keen to secure his services, but after negotiations Leeds decided not to sell their star striker.

"I had the chance to join AC Milan - that was after the 2001 season, when we got to the semi-final of the Champions League," Viduka told ESPN.

"The club was negotiating with Milan and Leeds wanted PS38 million.

"I was friends with (Milan's) Zvonimir Boban at the time, and we were sort of negotiating terms through him. In the end, (Milan) offered them PS38 million, and Leeds didn't want to sell. And that was that.

"I was a huge AC Milan fan as a kid. I grew up watching (Marco) van Basten, (Frank) Rijkaard and (Ruud) Gullit.

"I loved AC Milan. They were my favourite team."

Viduka said there had also been discussions with Ferguson's Manchester United.

"Manchester were interested in signing me ... and it was in the air," he said.

"It ended up not happening."

Viduka ultimately departed Leeds for Middlesbrough after they were relegated at the end of the 2003-04 season.

Before Leeds' financial problems hit, Viduka enjoyed a stellar run at the English club, but didn't have a great relationship with fellow Socceroo and club teammate Harry Kewell at the time.

Viduka believed a soured partnership with his former agent Bernie Mandic - who also managed Kewell - had affected their relationship.

"I had a problem with Bernie Mandic - (who) was my agent when he took me from Celtic to Leeds," he said.

"I would have thought that Bernie would have been in H's ear the whole time just in case I would've told him about what happened between me and him (Mandic).

"I think maybe our relationship at Leeds wasn't that good because - I can't say for sure that's it - but I think (Mandic) probably affected the way that (Kewell) viewed me, definitely."

Viduka said he and Kewell were now on good terms.

"I think Harry's been burnt by him (Mandic) as well," he said. 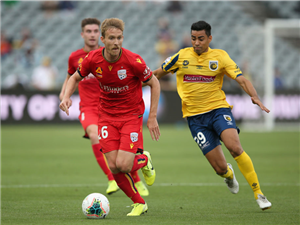