Central Coast Mariners coach Alen Stajcic believes there is cause for optimism after his youthful side ended their record losing streak on Friday, with a scoreless draw against a Newcastle Jets side chasing a semi-final berth.

The Mariners secured a scoreless draw against an opponent who had defeated runaway leaders Sydney FC just three days earlier.

"Obviously it is a little bit of a monkey off the back," said Stajcic.

"It has been a tough trot with all the losses, pre- and post-COVID, and all the challenges for the players in football and in their own lives."

The Mariners were outplayed for much of the first half, although they barely conceded any significant goalscoring chances and could even have snatched a win in the latter stages.

With veteran Matt Simon injured and former Socceroo winger Tommy Oar limited to a spot on the bench, the home side lined up with numerous inexperienced players.

And the Mariners boss was quick to hail his younger brigade, notably pointing to midfielder Josh Nisbet as playing a game-changing role as a first-half substitute.

"The way the young boys came on and had such a massive positive impact was a real shining light, and showed some of the green shoots that are coming through at this club, and where we want to take this club," Stajcic said.

"We had players 19, 20 years of age playing A-League football, and stepping up to the plate. We had a side packed full of young and emerging talent.

"It was a rewarding effort for us as a club to see that come off and put a real dampener on Newcastle's hopes for the finals.

"Newcastle beat Melbourne City and Sydney FC in recent matches, and if they make the finals, they would be a team the top two or three wouldn't want to play."

The Mariners, however, are still virtually assured of collecting the wooden spoon.

Second-bottom Melbourne Victory are ahead by six points and boast a vastly superior goal difference with two matches remaining.

Though only two points off sixth-placed Adelaide United, both Western United and Western Sydney Wanderers are breathing down their necks with four and three matches in hand, respectively.

Regular starter Matt Millar was forced off in the second half with a hamstring strain and is unlikely to play again this season. 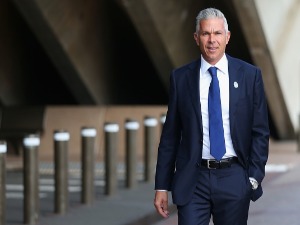