Western United's chase for an inaugural A-League finals berth suffered a setback with a 1-0 loss to Newcastle.

Newcastle have struck a blow to Western United's A-League finals hopes with a 1-0 win at McDonald Jones Stadium.

Roy O'Donovan handed the Jets the lead in the 29th minute and Western were unable to peg back the deficit.

The loss on Sunday night leaves A-League newcomers Western four points outside the top six, albeit with games in hand.

Western were left incensed when O'Donovan caught Andrew Durante high with a swinging arm in the 14th minute but didn't even draw a yellow card.

With no VAR, the incident went unscrutinised on the night - with the Irishman going on to score the winner.

"When Newcastle scored - and I'll take no pleasure in saying this - from a player that shouldn't have been on the park, (it) made the difference at the end of the game," Western coach Mark Rudan said.

"... Roy O'Donovan - and I like Roy by the way, I think off the park he's a good guy - but on the park he's got a history of doing things like that and I think it was clear as day.

"We all jumped off the bench and I don't believe that's part of the rules. Simple as that, you can't go and elbow someone off the ball.

"VAR's been taken away. I dare say if we still had that in place, it would have been a different sort of story altogether."

Jets coach Carl Robinson said he was uncertain whether O'Donovan had actually elbowed Durante but he would speak to the striker if he had.

Newcastle had the better of the early chances and their diligence paid off when Bernie Ibini slid a through ball out wide for Jason Hoffman, whose clever cross was met by a diving O'Donovan.

The Irishman directed a header past Filip Kurto for his 10th goal of the season.

O'Donovan almost doubled his tally in the 45th minute when he clattered a long-range shot off the outside of the post.

While the second half was eventful, Western were unable to snatch a point.

The Jets enjoyed a nice moment late, when brothers Dimi, Kosta and Maki Petratos appeared in the same team together for the first time, with Kurto denying Maki a goal in the dying seconds.

As a result, Newcastle leapfrogged Western into seventh place, one point behind Adelaide.

While the Jets are mathematically able to make finals, a poor goal difference with just one game left makes a top-six berth almost impossible.

"I think we'll come probably one or two games short, which is unfortunate," Robinson said.

Western are playing catch-up in the finals race, but still have four games to play. 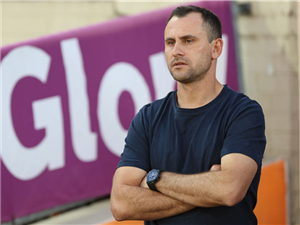