Socceroos striker Apostolos Giannou has made a move to Greece, joining Super League club OFI Crete on a two-year deal.

Giannou was a free agent after leaving AEK Larnaca at the beginning of June after a two-year stint with the Cypriot club.

He debuted for the Socceroos in March 2016 and has gone on to score two goals in 12 appearances for Australia.

A regular squad member under Graham Arnold, Giannou was also a late inclusion in Australia's 2019 Asian Cup squad, scoring in the 3-0 win over Palestine.

The 30-year-old will be the second Australian international playing in the Greek top flight with midfielder James Jeggo having joined Aris Thessaloniki last month.

Popovic has already been linked with several A-League players including Melbourne City's Josh Brilliante and his sons, and Perth Glory duo, Kristian and Gabriel Popovic. 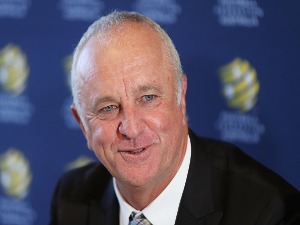