The major talking points for the 2020-21 A-League season following the release of the competition's fixture on Tuesday.

League bosses have scheduled matches to be played across the country, including Perth, in anticipation of relaxed border restrictions between states by the time the competition starts on December 27. The Glory don't play until mid-January but will be hoping their state government either grants them an exemption to travel or eases restrictions to avoid having to relocate to an eastern seaboard hub as they were forced to at the end of last season.

Wellington will remain hopeful the border between NZ and Australia can reopen sometime in 2021 but with overseas travel off the cards the New Zealand club will spend at least part of this season with Wollongong as their new home base in a situation similar to that experienced by the NRL's Warriors in 2020. The Phoenix's first game at their new home will be against champions Sydney FC on January 2.

The competition kicks off with new boys Macarthur FC playing in a new Sydney derby against Western Sydney before then rattling through 18 matches in eight days. The season opener will also be a historic one, as part of a double-header with the opening W-League fixture between the Wanderers and Melbourne City - the first time both men's and women's competitions have started on the same day.

Having called Suncorp Stadium home since the A-League's inception, Brisbane have ditched the 50,000 venue for the boutique Dolphin Stadium in Redcliffe for the 2020-21 season. Located 43kms north of Brisbane's CBD, the 11,500-capacity venue hosted two Roar matches last year and is understood to be a lower-cost facility for Brisbane to play their matches at.

The decision to start the league later in the year and run into the winter months has created a headache with several venues to be prioritised for the NRL and AFL when their 2021 seasons begin. This is a particular problem for Western United, with Geelong the primary user of GMHBA Stadium and both Melbourne Victory and Melbourne City wary of allowing their Victorian rival using AAMI Park for home matches. Eight of United's home matches are at a venue yet to be confirmed. 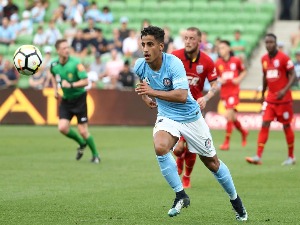