Sydney FC can jump into second on the A-League table with a win against struggling rivals Melbourne Victory.

Sydney FC's clash with cellar-dwellars Melbourne Victory is a must-win as the reigning champions attempt to keep pace at the top of the A-League table.

Fourth-placed Sydney drew with the Mariners on Saturday and face Victory on Tuesday and Western Sydney five days later in two games crucial to moving up the table.

Sydney (28 points, +7 goal difference) are unbeaten in five but have drawn their past three games and sit four points behind top-placed Melbourne City.

They can, at least temporarily, leapfrog both the Mariners (31 points, +7 goal difference) and Adelaide (30) into second place with a win over Victory.

"We need to win this game first and foremost against a team (that's) obviously, closer to the bottom, but they had a good result against the Wanderers the other night, they got an important win," coach Steve Corica said.

"We need three points to stay up near the top.

"... the boys are quite used to playing every couple of days now.

"It's good to get back (quickly) after the Central Coast game ... we want to get a win and this is a good opportunity for us to do that."

The games are opportunities for Kosta Barbarouses and Bobo to make an impact before Adam Le Fondre returns to the fold.

Victory snared a 5-4 win over Western Sydney in their first game under interim boss Steve Kean and Corica was wary of the new-boss bounce continuing.

"So that's another dimension that we have to deal with as well."

* Sydney have won their past six games against Victory 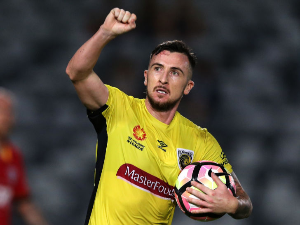