Melbourne Victory recruit Roderick Miranda is keen to keep playing a key role in the club's bid for an A-League Men resurgence.

Roderick Miranda hopes captain Josh Brillante will return to face Brisbane Roar but is prepared to again lead the way if required as Melbourne Victory attempt to maintain a promising start to the A-League Men season.

Brillante was a game-day withdrawal from last Saturday's season opener against Western United with a hamstring niggle.

Vice-captain Miranda captained the Victory on debut and was a rock at centre-back all game and scored the second-half winner.

"Of course I hope Josh plays this weekend. He's a very good player, he's very important for us, he's our captain," Miranda told reporters on Thursday, ahead of Sunday's game at AAMI Park.

"That decision is for the boss not for me, but I hope everybody will be fit.

'It was an honour of course. I arrived here a few weeks (ago) and (to be given) the armband, I was delighted for that.

The towering centre-back helped the Victory defence keep a clean sheet against United and is expected to play a key role in maintaining a solid back line.

"I will give my heart, I will do my maximum to help the team," he said.

"If we need to score a goal or I need to put my head (in the way) to stop a goal.

"I'm here for Melbourne Victory, me and everybody in the locker room.

"We are here to fight each game for the three points."

Portuguese defender Miranda and his family completed hotel quarantine before he started at the Victory, but the 30-year-old felt fit and firing.

He expected Tony Popovic's charges to rapidly improve after a long pre-season with no genuine competitive matches.

"We didn't have any competitive games but in training, in practice, all the time Tony pushes us harder to beat ourselves each day, to get better each day," he said.

"Now the games (have started), everything will start flowing. We've had the first game and for sure the second game will be better." 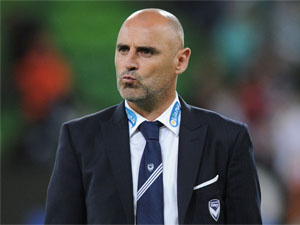