Barbora Krejcikova has found a distinguished fan in the great Chris Evert, whose icy on-court temperament reminds the 18-time grand slam champion of herself.

Chris Evert says she'll happily pass on her title of the "ice maiden" to the new star of tennis Barbora Krejcikova after the Czech's surprise but nerveless breakthrough triumph at the French Open.

The 18-time grand slam singles champion Evert was left impressed by the resilient performances of the unseeded Roland Garros winner, who knocked out five seeds, prevailed in three tough three-setters and even saved a match point in her semi-final before lifting the title.

"I'm going to hand her over my title of the ice maiden - because she's got icicles in her blood," said Evert, who evidently saw reflections of her own famed sangfroid in Krejcikova's three-set final victory over Anastasia Pavlyuchenkova.

"She didn't even cry at the Czech national anthem playing! She's held her composure eerily and that calmness for the whole two weeks, that's what impressed me.

"It helped her to win these matches.

"She was in trouble so many times, but she just has that calmness in coming back, as well as her tactical excellence. And she had that Jana inspiration."

The 'Jana inspiration" is that provided by Krejcikova's late coach and mentor Jana Novotna, the former Wimbledon champion who died from cancer at the age of just 49 in 2017.

Krejcikova said she felt Novotna's spirit guiding her every day of the tournament while Evert reckoned she could see shades of her late friend and adversary's game in her pupil's.

"The way she looks, her strokes, her movement - the similarity's amazing," Evert said on Eurosport.

"Jana was a very special person who had a wonderful heart and Barbora's thought about her every day in the tournament.

"Jana would have been ecstatic, she'd have been happier for her than her own success.

"She really took Barbora under her wing, like a big sister and family member as well as mentor and tennis coach."

Evert said the victory could be a springboard to even more success for the woman who'll have rocketed 100 places to No.15 in the world when the new rankings are announced on Monday.

"It wasn't until last fall that she broke into the top 100. It's just amazing.

"This is a woman who's been known as a doubles specialist but always wanted to be known as a singles player.

"It's been her dream and her goal - and she's now proving that she's a force to be reckoned with." 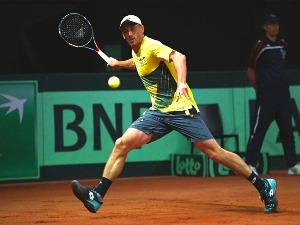