Chris O'Connell has joined compatriot Jordan Thompson in the quarter-finals of the ATP's Atlanta Open with an upset win over Italian No.2 seed Jannik Sinner.

O'Connell, who is ranked 132 in the world, sent down nine aces and converted the only break point of the match in the second set to muster the win.

The triumph over world No.23 Sinner takes the Sydneysider a step closer to his goal of cracking the top 100, with the victory set to see him gain 10 spots in the rankings.

He will join countryman Jordan Thompson, who was among the first through to the last eight.

The world No. 63 is in the top half of the draw and will now meet Brandon Nakashima, who eliminated top-seed Milos Raonic, for a place in the semi-finals.

Nick Kyrgios was trying to join the Aussie duo in the last eight, but went down 6-1 6-4 in less than an hour to the in-form Cameron Norrie.

The third seed won the first four games and served to love to seal the first set while a break for 5-4 helped the British No.2 secure a meeting with Finland's Emil Ruusuvuori, who advanced when No.7 seed Benoit Paire retired at 4-6 6-4 3-0.

In the men's doubles, Australia's Matt Reid and Alexei Popyrin defeated No.1 seeds Ken Skupski and Luke Bambridge 3-6 6-4 10-6 to reach the semi-finals. 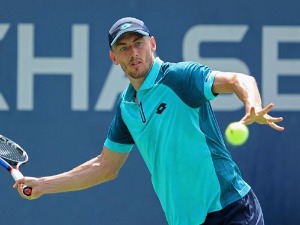