If Caroline Wozniacki is feeling "excited but nervous" as she lands in Melbourne for her tennis farewell at the Australian Open, it's nothing on what her best friend Serena Williams was feeling two years ago.

Wozniacki will bring down the curtain on a magnificent career at tournament's end.

The popular Dane's headline achievements are winning the 2018 Australian Open and the 2017 WTA Tour finals plus 71 weeks as world No.1 - the ninth most since the introduction of rankings in 1975.

Her lone grand slam crown secured in Melbourne is the reason she's decided to end her playing days in Australia, before she starts a post-tennis career, and hopefully, a family with her husband, retired two-times NBA All-Star David Lee.

Wozniacki's Australian Open title, secure with a thrilling final defeat of Simona Halep was memorable for reasons over and above the 7-6 (7-2) 3-6 6-4 win.

Wozniacki's victory, in a two hour and 49 minute marathon, arrived more than seven years after she acceded to the world No.1 ranking, allowing her to shed the dreaded moniker of best player never to win a major.

It also came after an almighty second-round scare against unheralded Croatian Jana Fett, in which Wozniacki saved two match points on Rod Laver Arena before winning the last six games to scrape through.

The drama was too much for Williams, who watched the 2018 tournament from home after giving birth to daughter Alexis Olympia, but couldn't tune in for the final.

"I can't watch people that are really close to me.

"I just remember staying busy. I did not check the score because I would have had a heart attack.

"The minute it was over I watched all the highlights and I went back and watched the match.

Woznacki's match against Halep was played in sweltering conditions, with the temperature still above 30C at 9pm, half-way into the see-sawing encounter.

Looking back on her triumph, Wozniacki said the round two battle was the fillip she needed to securing a breakthrough slam title.

"I was supposed to be going home," she said.

"I was down 5-1 40-15 and the girl was serving and I was already thinking if I was going to go somewhere after, that I needed some time off maybe.

"But I went through that and I thought 'I'm playing with house money right now. I shouldn't be here and I'm here'.

"I played so much more relaxed throughout the rest of the tournament ... I could really play freely.

"That really helped me.

"The final, it was really hot out there and I think we were both so tired by the end I didn't even get that nervous, I was just trying to survive out there.

"And I ended up winning."

As a much-loved former champion, Wozniacki will be feted in Melbourne this month.

She will begin her goodbye with an appearance at the Rally for Relief bushfires fundraiser on Wednesday night at Rod Laver Arena.

Despite her world No.35 ranking, it's a measure of respect for her that she will join living legends Williams, Roger Federer and Rafael Nadal and not seem out of place on Melbourne's centre court.

And she might yet contend for a second, fairytale, Australian Open title.

Wozniacki reached the semi-finals in Auckland before a three-set loss to surprise finalist Jessica Pegula.

At the US Open last year, it took eventual winner Bianca Andreescu to knock her out.

Williams and Wozniacki combined in a crowd-pleasing doubles pairing in Auckland, reaching but losing the final.

After that match, Williams looked her long-time friend in the eye and affirmed her preparedness for another shot at Melbourne Park.

"It's not over yet. One more tournament to go," she said.

The pair have been close for a decade, with Wozniacki including Williams in her bridal party at her wedding last year.

The Dane joked the only way she'd come out of retirement and come back to the tournament would be if Serena asked her to play doubles.

The pair were non-committal on pairing in Melbourne this month, with Williams saying "we'll talk about it but it's hard to play so many matches".

They will share a court at least once more after Wednesday night, with Wozniacki planning a testimonial against Williams in Copenhagen prior to the French Open in May.

The Dane has a few final wishes for her last fortnight as a professional tennis player.

"It's exciting and it's a little nerve-wracking at the same time," she said.

"I'm going to go out there and have fun and enjoy myself.

"I love Melbourne. I think it's a great city.

"I'll have my family there and part of David's family will be there ... we'll go out and have some nice dinners.

"And hopefully (Williams and I) will be on opposite sides of the draw next week." 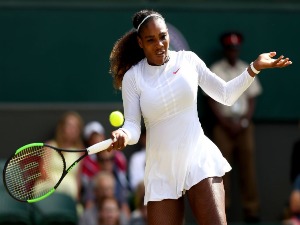