Nick Kyrgios has lashed fellow tennis star Alexander Zverev after videos emerged of the German partying in Monaco after being caught up in a COVID-19 scare.

Nick Kyrgios has savaged fellow tennis star Alexander Zverev after videos emerged of the German partying in Monaco just days after being swept up in Novak Djokovic's Adria Tour debacle.

Zverev pledged on Twitter last week to go into self-isolation after featuring in the ill-fated tour that led to Djokovic, his wife, three more players and other members of their various entourage to test positive to coronavirus following a stint at a Belgrade nightclub.

"I have just received the news that my team and I have tested negative for COVID-19," Zverev posted.

"I deeply apologise to anyone that I have potentially put at risk by playing this tour. I will proceed to follow the self-isolating guidelines advised by our doctors. As added precaution, my team and I will continue with regular testing.

"I wish everyone who has tested positive a speedy recovery. Stay safe."

But Zverev has since been widely condemned after being filmed dancing among a room full of people, with a furious Kyrgios taking the 22-year-old world No.7 to task on Instagram.

The one-time wild child of world tennis, Kyrgios is increasingly becoming the voice of reason for his shut-down sport.

The Canberran initiated the tennis tours' overwhelming response to Australia's deadly summer bushfires and has been the sport's most vocal player in opposing the USTA's decision to press ahead with this year's US Open during the COVID-19 pandemic.

The positive test for the top-ranked Djokovic has even led to questions being raised about how the Open can proceed, with Kyrgios repeatedly calling organisers "selfish". 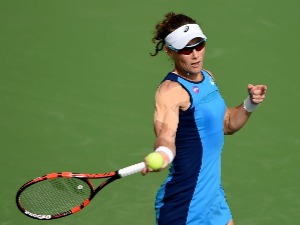