John Millman found Alexander Zverev too much to cope with at the ATP Tour's Cologne Championships but managed to take a set off the in-form German.

John Millman has become the latest victim of Alexander Zverev's superb run of form, battling courageously before going down in three sets to the home favourite at the ATP Tour's Cologne Championships.

Top seed Zverev, fresh from his indoor tournament victory at the same venue last weekend, had to repel a fightback from the 31-year-old Brisbane stalwart before he prevailed 6-0 3-6 6-3 to book his place in the quarter-finals.

It was a victory that even earned the victorious 'Sascha' a special surprise at the end of the match.

The official tournament dog Barnie strolled onto the court to congratulate him during the German's on-court interview.

"Now my dogs will be jealous!" Zverev said with a laugh.

The match, though, had been no laughing matter for US Open finalist Zverev, who found himself, not for the first time, struggling with serving problems.

The world No.7 served 10 doubles but still had enough in his armoury to win his fifth successive match in Cologne and claim an 11th success in his past 12 matches on hard courts.

Zverev had some praise for his 44th-ranked Australian opponent, though.

"John is someone who has beaten top players before... you've got to play until the end and I thought I did a poor job serving today," Zverev said.

"But I got the win somehow."

Even when down 2-4 in the third set, Millman earned three break points only for the slightly nervy Zverev to hold firm.

Millman will be getting fed up of the sight of the Zverevs after Alexander's older brother Mischa beat him 6-4 6-1 last week.

"I think my brother is much better than me, so that's why he won more easily," the elder Zverev joked.

Eighth-seeded Frenchman Adrian Mannarino cruised to a 6-3 6-3 victory over Serbia's Miomir Kecmanovic to set up a showdown with Zverev. 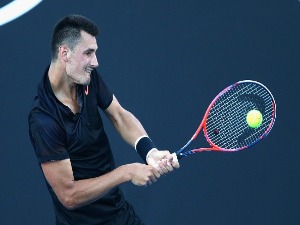