Fran Jones, a Briton with a condition which means she has only six fingers and seven toes, has defied the doubters again by qualifying for the Australian Open.

Fran Jones, a remarkable British youngster with a rare congenital condition, has defied doctors who said she'd never make it as a tennis player by qualifying for the Australian Open.

The 20-year-old, who was born with only three fingers and a thumb on each hand, while having just three toes on her right foot and four on her left, won her final qualifying match in Dubai on Wednesday to book her Melbourne spot.

It left Jones, who has an extended family in Brisbane, to celebrate her finest moment in tennis by declaring her hope that she can be an inspiration to every aspiring sports person who has to fight against the odds.

"You could say I've proved the doctors wrong and a good few other people too," said Jones, who has ectrodactyly ectodermal dysplasia syndrome.

"But I'm not bothered about proving people wrong. I'd much rather prove to people that 'YOU CAN'.

"I'm not playing out of revenge - I'm playing to have a positive impact on people who hopefully will read my story and take some positives."

Jones qualified for her first grand slam with a crushing 6-0 6-1 victory over Lu Jia-Jing in just 61 minutes, which followed her victories over former world top-30 and top-100 players Monica Niculescu and Jana Fett.

Jones has had countless bouts of surgery to try to improve her condition and has to play with a light racquet and very small grip, while having to work hard on balance and technique because of the difficulties she faces with footwork.

Yet she has always treated her condition as an advantage rather than a hindrance, despite the scepticism of one medic who said she would never make it in the game before she was accepted into the Sanchez Casal Academy in Barcelona, aged 10.

Now, though, she says she feels like she's won the X Factor.

"It/s like I've had the phone call from Simon Cowell and I'm on the way back from LA, not to London, but in this case to Australia."

She's only sorry that coronavirus restrictions, after she flies off on Friday, mean she's unlikely to see her Australian relatives in Brisbane.

"It's my grandma's brother and his family who moved to Australia about 20 years ago. They're going to be thrilled," she said.

"When I rang mum and dad back in England today, all I could hear was crying and screams and my dog barking.

"It was quite an emotional call because obviously we've gone through a lot together and I left the UK at 10 and you miss out on a lot of experiences with your parents. That's been hard."

Jones has never wanted sympathy for her condition, nor has she wanted to be defined by it.

"I wouldn't feel sorry for myself, and I don't think people should," she said.

"Each person is dealt their set of cards, and has to play their game and try to win with those cards.

"If you're dealt a full house straight away, then fair play to you; but if not, then you need to find a way to win the game with another strategy and that's what I'm doing.

"But I've got so much to learn. Hopefully people will join me in my journey, hand in hand with theirs. If they follow me I hope they can grow alongside me." 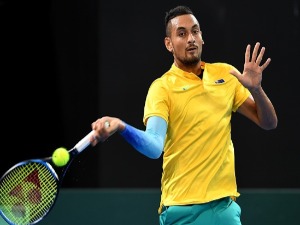