Samantha Stosur has a chance to mark the 10th anniversary of her US Open singles win with a women's doubles triumph after reaching the final with Zhang Shuai.

Far from finished, Australian tennis great Samantha Stosur is just a win away from snaring a seventh grand slam title after powering into the US Open women's doubles final.

Stosur and her Chinese partner Zhang Shuai defeated American Desirae Krawczyk and Chile's Alexa Guarachi 6-2 7-5 in the first of the two semi-finals in New York on Friday.

Stosur and Shuai will meet American teenagers and massive crowd favourites Coco Gauff and Caty McNally in the final.

A second women's doubles crown at Flushing Meadows, having lifted the crown with Lisa Raymond in 2005, would be a fitting way to mark the 10th anniversary of Stosur's 2011 singles final triumph over Serena Williams. 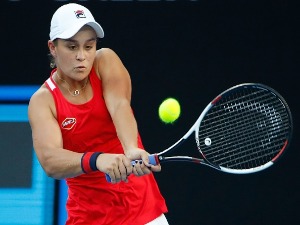