The Rosehill Timeform recap featuring a race by race overview of key performers and ones to watch from the Golden Rose meeting on September 28.

Bivouac fought hard to overcome Yes Yes Yes and become the third Godolphin-raced runner in five years to claim the Group 1 Golden Rose, following in the footsteps of Exosphere (2015) and Astern  (2016).

The Golden Rose quinella were impressive to say the least and surely must come further into calculations for The Everest at Randwick on October 19.

In the following race, the Group 3 Gloaming Stakes (1800m), Shadow Hero returned the highest winning figure of the event since Pendragon in 2006.

Standout maintained his unbeaten record by claiming the Heritage Stakes, a Listed sprint which tends to be a strong form reference deeper into the spring with Pago Pago Stakes winner Cosmic Force running second.

After Bivouac’s Golden Rose victory, Ranier provided the icing on the cake for Godolphin as he recorded a dominant success in the final event on the card.

A dual stakes winning three-year-old, the son of Lonhro delivered on Saturday with an impressive performance which still came in below his career best victory as a younger horse in the Carbine Club Stakes last spring.

His consistency this prep has been brilliant with Saturday his third win in nine runs this prep. Connections have kept him at Benchmark level where the son of Dansili has thrived.

With a Benchmark now of 94, Dr Drill has to contest stakes races and the Group 3 Coongy Cup (2000m) at Caulfield on October 16 profiles as a suitable transition event.

They’re racing on Golden Rose Day! Dr Drill wins the Monstar Foundation Handicap for @cmaherracing and @eustacedj with @ZRKD on board... pic.twitter.com/PLTD1r6feY

The Ross Stitt-trained mare ran on strongly off a fast early tempo for a 1.5 length success.

Daughter of So You Think, But I Know wins the TAB Highway for Ross Stitt and Andrew Adkins @tabcomau pic.twitter.com/mMLrOqekXJ

Standout now boasts three wins from as many career starts so connections couldn’t want for anything better.

The Exceed And Excel colt took a big class rise in his stride on Saturday and his rating has spiked substantially as well having been awarded a Timeform rating of 109 for the victory.

It’s his maiden race prep and post race trainer Gerald Ryan stated the stable will take it easy with Standout, giving the colt one more run either in the Roman Consul Stakes or the Brian Crowley Stakes.

The Heritage Stakes while a low key 3YO stakes event in itself, often acts as a launch pad for three-year-olds into more noted sprints that spring.

All of them then contested the Coolmore Stud Stakes and all performed extremely well, Viridine ran a close fifth while Kuro and Counterattack each ran third.

Cosmic Force in second was solid on resuming. The Pago Pago Stakes winner was giving Standout weight and fitness. It was a sound display with a view toward the Coolmore Stud Sprint during the Flemington Carnival.

Mister Sea Wolf has improved out of sight on Saturday from his Tramway run and returned a rating of 115.

The UK import has some soundness issues so we probably won’t see him race again for another three to four weeks. The stable generally has to space his runs out.

We will likely see him in Melbourne next. The son of Amadeus Wolf ran fifth in the Railway Stakes at Ascot last year so another trip west could happen too.

The next four across the line, Gem Song, Tom Melbourne, Noire and Con Te Partiro were each solid enough. All four are chances of backing up into the Epsom.

It’s worth noting however the last horses to win an Epsom coming out of the Shannon Stakes were Secret Admirer and Fat Al in 2011 and 2012 respectively, so it may not be the formline you want to focus on this coming Saturday.

Recent history suggests the Colgate Optic White Stakes and even the Bill Ritchie Handicap both at Randwick a week earlier are greater chances of boasting the subsequent Epsom Handicap winner.

Mizzy is a mare in form and now boasts three wins from as many starts this prep.

THREE IN A ROW! Mizzy wins the Golden Pendant for @TommyBerry21 and @Acummingsracing! Favourite Enticing Star was not in the hunt today… pic.twitter.com/E839UEvv6P

The daughter of Zoustar keeps improving with each run and on Saturday returned a Timeform rating of 114.

She is heading to the Silver Eagle and Golden Eagle now where Arcadia Queen sits atop of betting.

Enticing Star was plain. It’s just one run though and she didn’t have her Blinkers on.

Obviously, there is a lot of politics involved with an Everest. If she couldn’t take her spot, a colt like Yes Yes Yes on what he did Saturday would be a ready made replacement.

12 furlongs first time provided no worries for Stampede. The High Chaparral entire led, kicked and kept on going. Under the big weight he’s returned a new career peak rating of 119.

The seven-year-old is likely backing up again in The Metropolitan this Saturday. The last horse to claim the Colin Stephen - Metropolitan double was Railings back in 2005. He then won the Caulfield Cup for good measure two weeks later.

In the wake of Stampede’s success, it’s worth noting how the Waterhouse-Bott stable have kicked off their 2019/20 season.

They are sitting second in the Sydney trainer premiership with 14 winners at a strike rate of nearly 20%. While it is early days, they are on track for their best season in partnership based on total winners trained.

The favourite Dabiyr was was fair in fourth all things considered.

The UK import was only a Benchmark 78 horse heading into the race and was taking on Group winners. He sat more than 7.5kg out of the handicap and the class rise from a Benchmark 78 to Group 3 was simply too steep.

With that low Benchmark, connections have the option to drop him back in grade.

This was a brave win by a hugely talented colt. Yes Yes Yes headed him at the 100m but Bivouac fought back hard on the fence.

WHAT A BREATHTAKING FINISH! Brilliant Bivouac makes it five Golden Rose victories for @HugeBowman! @JamesCummings88 @godolphin have a serious horse on their hands... @rosehillgardens pic.twitter.com/yaqekFpEAJ

In winning he became the third Godolphin runner in five years to deliver them the Golden Rose. He’s also the fourth horse in the past six years to claim the Run To The Rose - Golden Rose double.

The Exceed And Excel colt on Saturday returned a Timeform rating of 123. That figure comes in right on the five year winning average of the event.

The Golden Rose is a stallion making race but shorter term it always tends to hold up as a form reference further into the spring.

Of the last ten winners, six have gone on to win another Group race that spring. Particularly notable victories in that group include 2018 Caulfield Guineas winner The Autumn Sun and 2013 Coolmore Stud Stakes winner Zoustar.

Yes Yes Yes in second was fantastic. The first two across the line both ran figures to suggest they wouldn’t look out of place in an Everest if they received a slot.

It's also worth noting Golden Rose runners can drop back to the 1200m of an Everest three weeks later and then contest the Coolmore Stud Stakes a fortnight after. While we are yet to see a three-year-old genuinely represent their crop in the finish of an Everest, surely it is only a matter of time.

Shadow Hero on Saturday didn’t settle as far back as he usually does which meant he wasn’t spotting too much of a start heading into the straight.

Shadow Hero cements his spot as the best staying three-year-old in the country with a commanding win in the Gloaming Stakes @rosehillgardens today @JoshuaParr8 @mark_mnracing pic.twitter.com/VPpa35s4rX

He was dominant that last 300m, winning by more than three lengths eased down.

We awarded the run a Timeform rating of 117 which is high for a Gloaming Stakes. He’s actually recorded the highest rating run to in the Gloaming since mid last decade when Pendragon won in 2006.

The Mark Newnham-trained gelding profiles as the horse to make it five of the last seven Gloaming winners who have claimed the double.

This was the icing on the cake for Godolphin on Saturday following Bivouac’s determined Golden Rose victory.

Ranier has improved with each run this prep and is still open to improvement off that run based on his master rating achieved as a three-year-old.

The Lonhro gelding produced a Timeform rating of 105 in winning on Saturday. His master figure is 109 which came when claiming the Group 3 Carbine Club at Flemington last spring.

Ranier is a dual stakeswinner but has a Benchmark low enough (86) to win one more race before he returns to Open company. 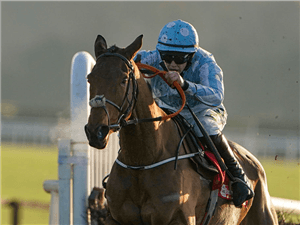